1-13 Adler Street
Back to MapContribute

1963-4, flatted workshops with shops, built for the London County Council, part adapted for college use

The County of London Plan of 1943 prescribed distinct zones of activity, recommending the dispersal of industry away from London’s inner boroughs. It was recognised, however, that small factories and workshops, heretofore scattered hither and thither, could not realistically be banished but would need in some degree to be kept close to the housing of those they employed and gathered together in low-rent premises. The plan therefore recommended the building of flatted or ‘unit’ factories, ‘which have proved suitable for clothing, some types of light engineering, light chemicals and chemists’ preparations, and furniture, although the latter will require more room for saw benches.’1 In keeping with this the Stepney–Poplar Reconstruction Scheme of the late 1940s envisaged an industrial enclave to either side of Plumbers Row, a heavily bombed area that extended west to Adler Street. Denys Munby presented formidable evidence in favour of industrial relocation in Industry and Planning in Stepney: A Report presented to the Stepney Reconstruction Group (1951). But, having investigated multi-storey flatted factories, the LCC reaffirmed their desirability in East London in 1954 as redevelopment began to swing into action. A Unit Factories programme was begun and an exemplar followed at Long Street in Haggerston in 1958–9. Further support for this approach to keeping employment local had come from Michael Young and Peter Willmott.2

Compulsory purchase and other difficulties meant that Walter Bor, the planner–architect in charge of redevelopment in Stepney in the LCC Architects’ Department’s Town Planning Division, had to revisit plans for the Plumbers Row area in 1959 to accept mixed use before he had worked up a scheme for unit factories/workshops. He turned to another cleared bombsite on the west side of Adler Street (beyond the zone) and alternatives for a two-storey building were prepared and revised. Yorke, Rosenberg & Mardall were engaged to see the job through in 1961 and prepared a scheme for a five-storey block to house fifteen units of from 600 to 2,200 square feet for light industry or wholesale showrooms above seven ground-floor shops, with access galleries off two stair and lift landings to permit subdivision. A specification for fair-faced concrete finish of the highest standard was questioned but approved as being of ‘architectural importance’. When tenders came in too high, the architects were obliged to reduce the estimate of £124,520 by £22,000. In the event the contract went to William Willett (Contractors) Ltd in 1963 for £110,430 and the building was completed in 1964. Early tenants were mostly in the rag trade, largely tailors.3

Built with a reinforced-concrete frame and grey-brick infill panels on a regular grid, there is cantilevering that with the recessed galleries gives this building’s long elevations dramatic Modernist geometry. Much of the fair- faced concrete has been painted, rougher aggregate staying exposed on the gallery rails. Parts of the building have been adapted for educational use, the second and third floors unified for the Icon College of Technology and Management London. 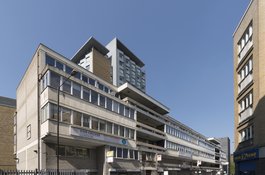 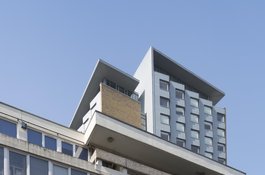 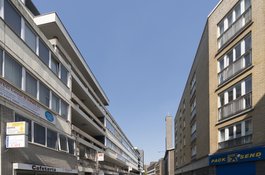 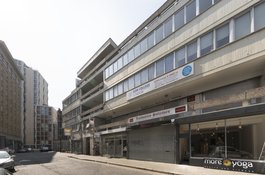 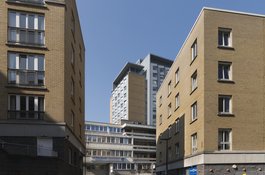 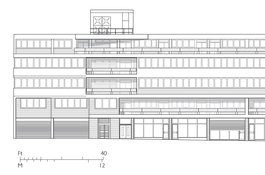