Varied houses and workshops on this site were replaced by this large five-bay four-storey warehouse block in 1898–1900. Possibly designed by A. E. Christy, it was built by Walter Gladding with wooden floors on iron columns for H. Karet & Son, wholesale ironmongers, who continued here till around 1960. Their premises extended back to Vine Court where there now stands a single- storey range of about 2012 into which small shops have been inserted. The main block houses offices above shops.1 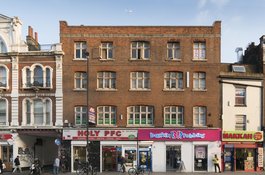