108A Whitechapel Road
Back to MapContribute

108A Whitechapel Road
Contributed by Survey of London on April 19, 2018

Twin large warehouses of 1878 here were cleared around 1890 for the Metropolitan and District Railway Company, to provide a supplementary blow hole, for additional ventilation of the steam trains running below; the anomalous address came about because this was a vacant site at renumbering in 1898. Electrification permitted redevelopment and the present building went up in 1922–4, intended for a shop with flats above. The freeholder was David Taub, the woollen merchant at No. 108, and the project was a speculation by Abraham Segalov, a watchmaker of Black Lion Yard and Clapton Common, and a Russian immigrant. It was built by the highly reputable Kirk & Kirk. Early occupants were the Jewish Free Reading Room, Benjamin S. Birkhahn, dental surgeon, the Hospital Saving Association, and the Vine Social Club. By an architect unknown, this is a fair four-bay neo-Georgian building, with handsome brown brickwork between a classically moulded artificial-stone shop surround and cornice, the attic brickwork having been painted. It is outwardly little altered, the fascia sign for Zaza’s Restaurant aside. The upper storeys have been adapted for college use.1 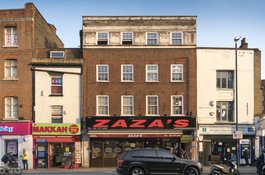