136 Whitechapel Road
Back to MapContribute

A large house on the site of 136–138 Whitechapel Road was built around 1770 (following a 61-year lease of 1763 to Thomas Pearce and John Lamb) on what had been open ground for William Menish, an innovative chemist who was here until around 1810. In 1776 Menish was accused, but acquitted, of creating at the New Road corner, ‘a nusance, in erecting an elaboratory and making spirits of hartshorn’.1 Menish was followed by John Burnell, a horn manufacturer, who also succeeded Menish at a mill and workshops on the north side of Whitechapel Road further west. There was a large yard to the rear that came to be used by stone masons. Thomas Kincey, a wheelwright and carriage-maker, was at the New Road corner (formed in 1754-6) by 1780.2

Menish’s house on the site of Nos 136–138 was refronted and altered on its east side in 1826–7 by the formation of the short three-storey and gambrel row of shophouses that stands at Nos 138–146. This was presumably a speculation on the part of the owner, John Burnell, who became a magistrate, possibly involving Isaac Bird, a property developer who was present round the corner on New Road. The group was probably brick-faced originally, with first-floor relieving arches above the entrances of the houses at Nos 138 and 140, and a recessed quadrant corner. The corner property appears to have been a public house from the outset, possibly a replacement of a predecessor. It was later known as the Earl of Aberdeen public house which continued here up to the 1920s. First occupants at No. 138 in the 1830s were Francis Arnold, a tailor, followed by Edmund Baker, a dyer and scourer. From about 1840 No. 140 housed Thomas and Robert Martyn, Devonian linendrapers, later also carpet and furniture dealers, who spread to Nos 136 and 138 in 1846. This unification might provide the date for the harmonization of the façade by rendering and architraves, even unto the bizarrely singular fluted pilaster between Nos 136 and 138. Robert Martyn built a carpet warehouse behind Nos 138–140 in the 1850s.3

In the early twentieth century No. 136 housed a photographer’s studio, for Hermer Hyman Polsky and others. It lost its upper storeys as a result of bomb damage. Arthur Dubosky had the carpet warehouse refitted as a restaurant in 1927 and N. Davis Ltd, hosiers, took Nos 138–146 in 1929 and formed a unified menswear shop with extensive alterations carried out by George Barker, a New Road builder. The warehouse/restaurant came down in the 1950s, but Davis continued here into the 1990s, with basement fitting rooms and upper-storey workrooms sandwiching the shop, which had a corner island vitrine display unit that survived till 2015. The block was refurbished and converted in 2013–15 to form nine flats above separate shop units in a project by ERS Investments Ltd overseen by Form Architecture Ltd (Lewis Cook, job architect). Plans of 2007 proposed reconstructing the façade of No. 136 in the form it had up to 1940, but these were revised for a pastiche façade that attempts a unity with Nos 138–146 that had not previously existed. Nos 138–142 is now known as Corner House, and the corner shop (Nos 144–146) has been a branch of Ambala, the Asian sweetshop franchise, since 2015.4 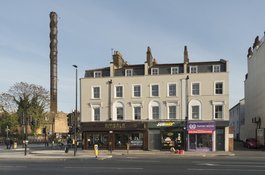