New Road's formation and early land use
Contributed by Survey of London on May 9, 2018

New Road was formed in 1754–6 in close connection with the London Hospital’s move to the south side of Whitechapel Road in 1752–7. Slightly earlier than the better-known New Road of 1756–7 (now Marylebone Road and Euston Road), it shared with its bigger north-westerly sister the attribute of being a bypass to built-up districts. More particularly, it made eastern Whitechapel (heretofore ‘town’s end’) more accessible from riverside districts, linking what are now Cable Street and The Highway in the south to Whitechapel Road across entirely open fields. It more or less followed the line of Civil War defences, though this might be little more than coincidence. The road was enabled by an Act of Parliament and overseen by a body of trustees led by prominent commercial men from riverside districts (Jonathan Eade, a Wapping ship-chandler, John Shakespear, a Shadwell ropemaker, Joseph Curtis, a Wapping sea-biscuit maker, Hugh Roberts, a St George-in-the-East brewer, and William Camden, a Wapping ship-owner and slave-trader), some among them hospital governors. For these people good access to the hospital presumably mattered not just for themselves and their families, but also for their workforces.

New Road’s frontages remained largely undeveloped for more than thirty years. Only the road’s northernmost end lies in Whitechapel parish. The connections formed there were first exploited for industrial use in the shape of carriage- making, present by the 1770s. Houses followed in the 1790s, but industry persisted and transformed, turning predominantly to clothing trades in the early twentieth century.1

In planning the road in January 1754 the hospital’s governors and the road’s trustees concurred that it should lie as far west as possible on ground pertaining to the hospital. Its north end therefore abutted west to the built- up estate that since 1737 had been owned by John Turner, a carpenter–builder (see Nos 109 to 133). A ditch or sewer running east–west divided this landholding from the hospital’s. By 1774 John Kincey had a wheelwright’s yard and associated buildings on the hospital’s (south) side of this ditch on the west side of New Road. To this holding Kincey added an existing house (previously Richard Bishop’s) and in 1775 built a double-fronted house on the site of 107 New Road with a new 65-year lease. In 1778 he extended his one- and-a-half acre holding north on Turner’s land to Whitechapel Road and the corner for carriage or coach-making. Kincey further enlarged his premises southwards in 1789 to the then intended Charlotte (Fieldgate) Street corner with the New Road frontage and the sites of what later became 101–109 Fieldgate Street, promising new buildings for 99-year leases from the hospital. Kincey carried on to about 1830 on much of this extensive site on and behind New Road between Whitechapel Road and Fieldgate Street.2

A shophouse at the Whitechapel Road corner was tenanted by Thomas Amey by 1774. He was perhaps responsible in the 1790s for putting up a one-room deep house at 129–131 New Road, occupied by his widow, Sarah Amey, up to about 1818. This survives in much altered and partial form. Further south, Kincey gave up the sites of Nos 109–119 in the 1790s for the building of two houses, further much-altered survivals at Nos 109 and 111, with a large warehouse to the north. In the first years of the nineteenth century Andrew Richards, a stonemason, occupied this with the larger house at No. 111 (originally 2 New Road). Thomas Ramplee had the smaller house at No. 109 with a cooperage to the rear. Thomas Turner, another stonemason, was based on the opposite side of New Road at its north end in the 1820s and 30s.3

This was the site of John Kincey’s double-fronted house of 1775, on a setback building line that was followed at Nos 109 and 111. His carriage-building and wheelwright’s workshops and yards were to the rear and north. William and John Seaborne, wheelwrights, followed Kincey from 1831 into the 1890s. They were succeeded by Bonallack & Co., carriage or van builders, who finished up here in the 1920s as motorcar body builders.1 The site was redeveloped in 1929–30 for M. Myers Levy as a four-storey, lightly Art Deco (Moderne) steel- framed clothing factory of lettable workshops with a three-storey block to the rear for a garage below additional lettable units, to provide eleven workshops in total. The first scheme did not include the garage, but the site’s long- standing vehicular links were perpetuated by the addition of No. 101 in 1930 for an entrance in a full-height rendered bay that looks like the motor-age afterthought that it was. The architect was Hume Victor Kerr, of Arbour Square, Stepney, and Lincoln’s Inn, the builders the Pitcher Construction Co. Ltd. This was Kerr’s first work on the London Hospital estate; a number of others followed. Levy intended to call the development New Buildings then Newley House, before settling on Service House, comprehending New Service Garage. Simmonds & Landsman had silks and woollens counters in one of four shop units. Alongside was Lewis Mendelbaum’s dining rooms. The garage was extended to 99 New Road and 109 Fieldgate Street in 1955 for E. Levy following war damage, to plans by Arthur G. Porri & Parners, with S. Wiener of Bow as builder. became a base for taxis and closed around 1970. Clothing factory use continued and in the 1980s Shiv Fashions had the premises, renamed Shiv House.2

Owned by Levy International Ltd, registered in the British Virgin Islands, the building fell empty and into dereliction. Refurbishment in 2015–18 by CMT Design and Construction, with Synthesis Architecture, formed New Road Hotel. This involved the addition of an attic storey as well as the raising of the rear block for premises with seventy-three bedrooms.3 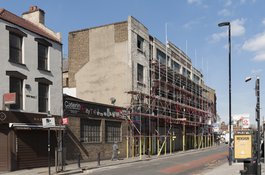 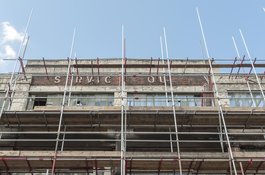 Service House detail in May 2016
Contributed by Derek Kendall 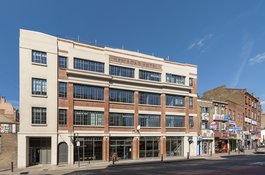 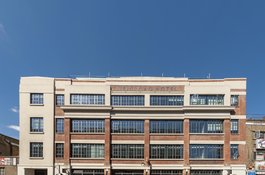 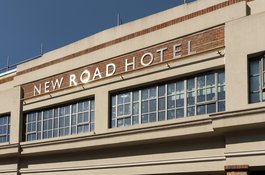 New Road Hotel, detail in May 2018
Contributed by Derek Kendall 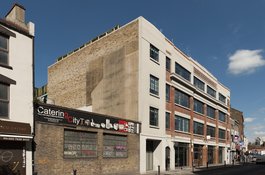 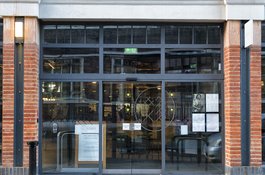