Mansell Court, 69 Mansell Street
Contributed by Survey of London on May 6, 2020

There were five houses (Nos 65–73) on the site of this office block. At No. 65 there was a broad five-bay three-storey late seventeenth-century mansion in the mould of its northern counterparts until its demolition in 1915. Adjacent to the south at Nos 67–73 stood four three-bay houses on half-width plots. Early occupants there in the 1730s and ’40s included Captain William Clarke (at No. 67), and William Fletcher and Henry Vandeuren (d. 1748), vinegar merchants (at No. 69). Later Georgian residents included Edward Nelson, a schoolmaster, Solomon Israel, a broker, and William Lovegrove, a salesman.1

The big house at No. 65 was held by John Souther in 1693–4 and by Captain John Pelly from the late 1730s to his death in 1762. He was followed by Abraham Mocatta (1730–1800), from one of London’s leading Jewish families, a dynasty of silver and bullion brokers to the Bank of England, the East India Company and the Royal Mint. Mocatta lived here until his death, while working in partnership with Alexander Isaks Keyser from about 1777, joined by Asher Goldsmid around 1780. The next resident freeholder at No. 65 was Jacob Booth (d. 1820), a prosperous shoemaker, who appears to have put up a large warehouse facing West Tenter Street. Andrew Laughton, a Scottish wholesale shoe manufacturer, followed in the 1840s and ’50s.2

In 1872 the former house was extended back to fill almost the whole garden and the forecourt was covered by a single-storey shop. John Hudson, architect, oversaw these additions for J. Jacobs & Co., looking-glass manufacturers. Samuel Moses, a merchant dealing in second-hand military clothing on Alie Street, purchased No. 65 in 1885 when the premises consisted of ‘dwelling rooms, two show rooms, a large shop, offices and basement’, with a recently built five-bay three-storey warehouse facing West Tenter Street.3 Moses continued redevelopment, building two replacement warehouses on West Tenter Street in 1899 when Dunk and Bousfield were his architects, and as S. Moses & Sons Ltd entirely replacing Nos 65 and 67 in 1915–16. The shophouse at No. 73 had been rebuilt in 1847, and Nos 69–73 were altogether replaced in 1919–20 by a four-storey warehouse that was occupied early on by Shoe Retailers Ltd and Arthur Swain, a wholesale stationer.4

Joseph Tetley & Co. Ltd, who had been at the Alie Street corner since 1912, had taken the warehouse at Nos 69–73 by 1930, also acquiring Nos 65 and 67 by 1938, all for the storage of tea and coffee. Repairs and rebuilding followed substantial war damage and from 1958 Nos 65–73 were united as Mansell House and occupied by the Ministry of Works, later the Department of the Environment, for use by surveyors and engineers.

The whole site was commercially redeveloped to designs by Covell Matthews Wheatley Architects following approvals given in 1988. The resultant six- storey building, offices with two top-floor flats and again called Mansell Court, has a Postmodern façade in which polished grey granite with red trim step ups from the largely glazed centre around a rocket-shaped entrance bay. That gives access to an atrium ‘rotunda’. The window proportions with pseudo- brick heads perhaps faintly recall Georgian forerunners.5 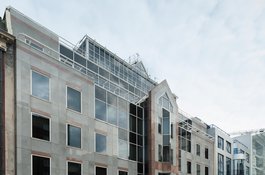 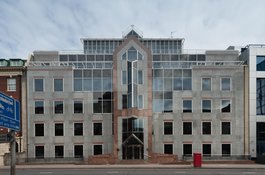 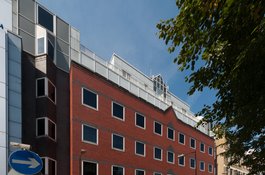