Whitechapel Idea Store
Back to MapContribute

The sites that had been 319–329 Whitechapel Road were cleared in connection with the Albion Yard and Sainsbury’s developments in 1994. Once those projects were complete Tower Hamlets Council took this large corner property south of the new supermarket for public-library use. This was one of the first steps towards implementing a new approach to this building type. A Tower Hamlets’ strategy of 1998–9 envisaged ‘Idea Stores’ in shopping districts, to be conveniently situated centres for the acquisition of all kinds of information, to promote lifelong learning and self-improvement in both mind and body. The ‘stores’ were to be sited and designed to provide ‘a unique environment using the architectural and interior design language of the retail and leisure industries. Strong retail style branding and image promotion will reinforce the total break with “Victorian municipality” that so discourages participation and will help excite and re-engage the local community.1 This was novel, but it did have unavowed echoes of local late-Victorian initiatives.

Council officers explained to their Building Control colleagues that they were commissioning ‘high-quality consultants’ to achieve an ‘innovative landmark design’ for a ‘radical innovative concept’.2 Following a competition, David Adjaye was appointed the programme’s chief architect in 2001. In his 30s and of Tanzanian–Ghanaian origin, Adjaye had quickly acquired a reputation for excitingly radical and elegant architecture, in significant part through the close-by Elektra House at 84A Ashfield Street of 1999–2000. The Whitechapel Idea Store was conceived as the programme’s flagship and Adjaye/Associates prepared plans in 2001–2. Under Adjaye’s direction, Samson Adjei, Christopher Adjei, Yohannes Bereket, Nikolai Delvendahl, Cornelia Fischer, Jessica Grainger, Martin Kaefer, Haremi Kudo, Sean McMahon, Yuko Minamide and John Moran worked on the job, and Arup were the engineers. They aimed to produce, in Adjaye’s words, ‘a glamorous place that’s open to everybody ­– an accessible civic building’, ‘like a mall, clean and glass and glossy’.3 A commercial architectural vocabulary was thus turned to civic purpose. Adjaye also saw through another contemporary new-build Idea Store in Poplar at the other end of the Borough.4

Whitechapel’s Idea Store was built in 2003–5 by William Verry Ltd, contractors. Its main five-storey almost cubic block houses not just a library, but also adult-education facilities, a crèche, a gallery for exhibitions and a café. The children’s library to the south-west on the ground floor was to be a retail unit in early plans, and remains convertible to such use if finances require. The precast-concrete and steel frame is clad in glass on three sides, with translucent green and blue strips rhythmically arrayed and allusively reflecting market awnings below. There is grey aluminium cladding to the east where a path to the supermarket was opened. The upper storeys of the Whitechapel Road façade are suspended above the pavement from which a double-flight escalator rises, a means of entry intended to symbolise ease of access as in a shopping mall, but sadly soon put out of use for security reasons. The glazing is internally supported by Kerto laminated timber fins or mullions, a deliberate break from the otherwise corporate appearances, which are integrated with the building’s designedly flexible fittings. Inside there are red rubber floors, exposed concrete ceilings and, in a central core, twin interlocking staircases with black trim and recessed handrails as at the recently completed Tate Modern. A two-storey rear pavilion houses a dance studio and therapy room on its upper level, which drops down to an easterly open deck. A black aluminium wall faces the supermarket car park. An intended video-wall element to the main façade was not completed. The building was an immediate critical and functional success, and more than a decade on it remains well used and eloquently appreciated as good civic architecture.5

Early history of the Idea Store site
Contributed by Survey of London on Jan. 26, 2018

A row of shophouses on sites that became 319–329 Whitechapel Road probably had seventeenth-century origins. John Hayward, a floorcloth and carpet manufacturer of Newington Causeway, established a Whitechapel factory in the 1780s on the south side of Whitechapel Road (on the west side of what is now Cavell Street, a Post Office site since the 1880s). Within a decade the enterprise had spread to a shophouse across the road, immediately west of the Drapers’ Almshouses, the site corresponding to what became 329 Whitechapel Road, and to new warehousing on the east side of North (now Brady) Street. Hayward died in 1794 and left his business in trust to his teenage son John Samuel Hayward (1778–1822). Thomas Hayward, probably a brother and uncle, was resident at and no doubt in charge of the Whitechapel site. John Samuel Hayward gained fame as an artist, but did also apply himself to floorcloth making. Hayward & Co.’s north-side premises passed to Edward Wentworth from 1828 to his death in 1848, and then to Thomas Edward Davis and William Wentworth Davis, under whom floorcloth manufacturing continued here until 1882.1 No. 329 was rebuilt for Messrs Davis in the early 1860s to designs by James Edmeston as a showroom–warehouse of five bays and four storeys with what was said to be a stone front with Gothic arcading – the Builder disliked it. After acquisition by Mann Crossman & Paulin of the Albion Brewery adjoining, these premises were used by teadealers, Walker & Dalrymple (later Teetgen & Co.), who were also at Nos 319–321 on the Brady Street corner, a rendered Italianate pair of 1857. Nos 323–327 were humble earlier singletons.2 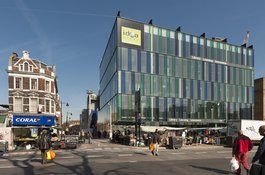 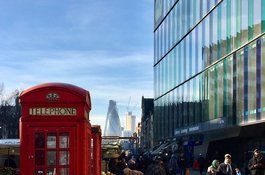 Looking to the City of London
Contributed by f.ciufo 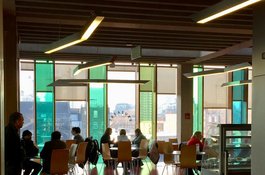 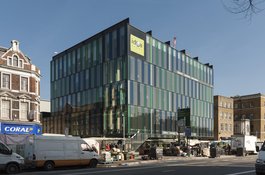 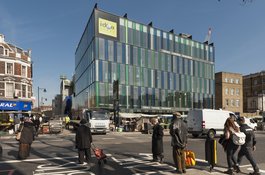 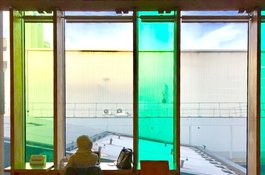 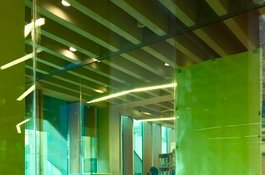 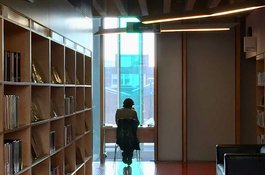 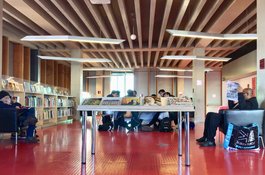 Inside the Idea Store
Contributed by f.ciufo 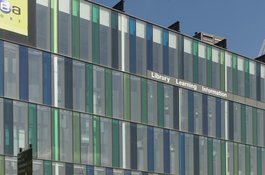 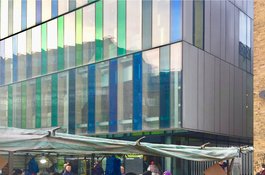 Market and library
Contributed by f.ciufo 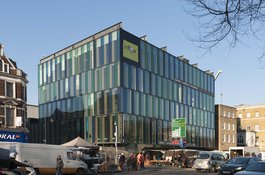 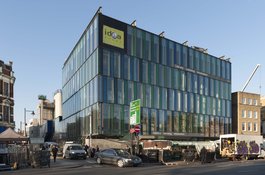