201 Whitechapel Road
Back to Map

William Stanborough (or Stanbrow, d.1694/5), a local citizen mason, took a 500-year manorial lease of a piece of waste ground here in 1681 and proceeded to develop this and other nearby sites. William Hufton, an aqua fortis or colour maker, was here in the late eighteenth century. He was succeeded in the early nineteenth century by George Ramsden, whose family continued the colour- making factory to the rear into the 1850s. That then became a rag warehouse until displacement by the railway in the 1880s. The front building was replaced in 1876 with the present four-bay front range and a back warehouse, built by Harris & Wardrop of Limehouse and first occupied by the Universal Bedstead and Bedding Company. From around 1900 the building housed Cohen & Sons, which firm, after a change of family name, became David Drage & Sons, household furnishers who expanded to Holborn and then to Oxford Street in 1930.1 The shop later sold menswear. Since about 2000 it has been Ranees, an Asian clothing retailer. The polychrome brick façade was enhanced by the removal of render in the 'High Street 2012' works, revealing ‘Rose House’ in a central panel between the upper storeys, and restoring the older ‘BEDDING’, ‘BEDSTEADS’, ‘FEATHERS’ and ‘FLOCKS’ in the tympana above the first-floor windows. 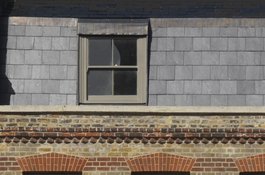 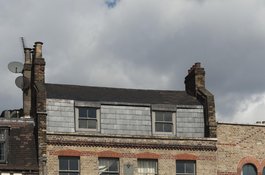