There were two houses here from the early 1770s. A warehouse with a hipped roof was added to the rear in 1849–50 for Henry Nathan, a linendraper, with J. Little and Sons as his builders. It is said to have had an internal galleried iron frame. In the late 1870s the site became the premises of Wainwright and Gross, brush-makers, successor to the brush-making firm that had been headed by Henry William Wainwright at 191 (then 84) Whitechapel Road until his execution for murder in 1875 following the discovery of the body of Harriet Lane the previous year at his depot at 130 (then 215) Whitechapel Road. William Wainwright, a brother and partner, continued the brush-making business on a humbler scale on Great Garden Street until his death, probably suicide, in 1892, the firm carrying on here until after 1910. Between the wars the property housed Hyman Cohen & Co., flour factors, and in the 1950s it was adapted to be part of the clothing factories adjoining north and east. It later passed through use as a paper-bag depot. The front part was a bomb-site that was not redeveloped until 1987–9. Its two-storey brick warehouse, built for H. Karim of Europa Wholesalers to designs by Paul Hardin of Peak Design Ltd, links with the early-Victorian warehouse to form the Clifton Trade Centre, owned and run by Shiraj Haque, an eminent local entrepreneur and ‘curry king’ (formerly at the Clifton Restaurant on Brick Lane). A recent refurbishment has obscured or removed the internal structure of the early- Victorian warehouse.1 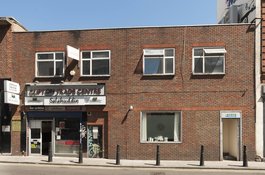