Attlee House
Back to MapContribute

Attlee House
Contributed by Survey of London on Dec. 14, 2018

On 18 November 1971 the Queen opened a new building as part of the Toynbee Hall estate. Attlee House was an L-shaped building with an east-west range on the site of part of College Buildings, including the former Wadham House. The new building  linked by first and second-floor walkways at its west end to a north-south wing running from Wentworth Street on to the site of the old library that had adjoined Toynbee Hall.1 It was a plain red/orange brick building, four storeys high, erected to the designs of David Maney & Partners, architects.2 It mixed offices (for the Attlee Memorial Foundation) and residential (42 residents including six elderly single people, housed in studio flats, with one-room flatlets), with the St Leonard’s Housing Association for ex-prisoners on the top floor.3 Attlee House was demolished in 2016 in preparation for the joint Toynbee Hall and London Square redevelopment, with a block of flats named 'Leadenhall' currently (December 2018) being built on the site.4 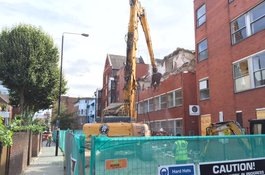 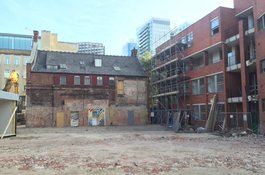