87 Whitechapel High Street
Back to MapContribute

87 Whitechapel High Street
Contributed by Survey of London on July 11, 2018

Another utilitarian war-damage replacement, built in the late 1950s, very similar to No. 84, three storeys with red brick facing and triplet metal windows within thin concrete frames. It replaced a substantial building of 1835, three windows wide with pediments to those on the first floor. The site was by the 1670s, and until 1769, two houses of at least three storeys, and their back premises, either side of a court which led to an undeveloped plot of land adjoining Angel Alley.1 By 1733 they were in the occupation of Roger Osmond, distiller, who left one each in 1738 to his sons, Francis, another distiller, and Robert, a cheesemonger, who was also to have use of a brewhouse at the distillery.2 They passed through several hands until 1769 when John Rex (1726-92), a wealthy local distiller, Master of the Distillers Company in 1782, acquired them and rebuilt them as a single property, for the distillery he ran with his partner and stepson, Richard Perigoe (d. 1796).3

By 1818 it consisted of ‘a spacious rectifying distillery, many years established, with principal and clerks counting houses, a respectable spacious dwelling house… stabling for four horses, loft over, a covered yard, waggon lodge, harness room, dry warehouse, all enclosed by ‘lofty folding gates’.4

The lease of the ‘capital dwelling house, distillery and vaults’ was offered for sale in August 1835 and acquired by the London and Westminster Bank, the first joint stock bank, founded under the Bank Charter Act of 1833.5 Presumably after some alteration, it opened as the Eastern Branch on 1 January 1836, one of three branches opened that day, the first outside the initial branches in Westminster and the City.6 Its manager from the 1840s to the 1860s, William Dent Asperne (1803-76), was the son of James Asperne, proprietor of the European Magazine from 1803 to his death in 1820. As a 12 -year-old in 1816 the future bank manager published a sermon, ‘On the Benefits of Choosing a Heavenly Kingdom in preference to an Earthly One’.7 After the bank moved to new-built premises at 130 High Street in 1866 the building became a furniture and upholsters and a refreshment room until it opened as the People’s Café in 1875.

The People’s Café Company was modelled after similar establishments in Liverpool, and its President, who conducted the opening ceremony at 87 High Street on 12 May 1875, was the George Yard Mission’s most prominent supporter, the Earl of Shaftesbury. It was one of the earliest temperance-inspired coffee houses in London, of which there were 121 by 1884. The idea was to create places ‘sufficiently attractive to compete with the beer shop and the gin palace’ in large and cheerful rooms on the capital’s busiest thoroughfares.8

The building was substantially altered to the designs of George Williams architect of Buckingham Street, Strand, to include, on the ground floor, a coffee room, ‘well-supplied with little marble-topped tables’, and on the first floor a reading room, ‘a small library, a room where chess, draughts, dominoes and the like may be played; {and} a room for billiards and also for bagatelle’. There were plans to fit out the basement ‘as an American bowling alley’. Though it was touted as a place where ‘men’ could get a ‘very reasonable and sufficient dinner’ for 6d, the People’s Cafés also recognised a need for working women to find a place to eat during the day. A commentator in 1878 noted that ‘wherever suitable coffeeroom accommodation has been provided for them, working women have gladly availed themselves of it’, and noted ‘many customers of this class’ in the Whitechapel café.9

The company, however, got into difficulties, the building’s freehold was sold for £3,550 in December 1884 and the café closed shortly after. 10. The buyer was apparently the George Yard Mission as it was the Mission which in 1889 moved into No. 87, having remodelled the rear parts of the site and rebuilt part of the back premises of No. 86, to the designs of John Hudson, architect, to connect with the original Ragged School building in George Yard (Gunthorpe Street) and opened No. 87 as a girls’ refuge; by 1891 there were eight ‘inmates’ aged 8 to 12.11 The Mission continued there till the First World War, and thereafter the building, partially rebuilt in 1923, with more showy stone-effect frontage and pediments to all the first-floor windows, reverted to conventional Whitechapel rag-trade use, as Edward Bontnor & Co Ltd, wholesale clothiers, followed by J. Goide Ltd, caterers, from 1926. Joseph Goide (1886-1946), who emigrated from Russia in the 1880s and set up a baker’s in Commercial Road, had by 1926 seven catering premises in East London and one in the West End, with headquarters at 54 Whitechapel High Street. The ground-floor café ‘with a restful Wedgwood motif’ could sit 250, as could the first-floor restaurant, ‘in buff and old gold’, which also featured ‘a magnificent dancing floor’, in the top-lit former mission room to the rear, and a live orchestra.12 Goide’s moved to Willesden in the 1950s when the war-damaged building was finally demolished and, following rebuilding c. 1959, the building housed wholesale textile merchants, with solicitor’s offices upstairs, and, since the 2000s, an amusement arcade, currently Cashino.13 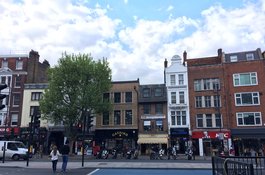 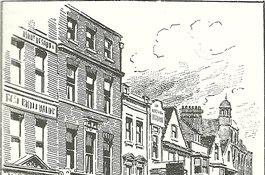