Garrick Court
Back to MapContribute

Garrick Court, on the corner of Scarborough Street and East Tenter Street, is a mixed-use building, with commercial and parking on the ground floor and ten 3-bedroom houses around a communal courtyard at podium level.  It was designed by Davy Smith Architects for Genesis Housing Association as affordable-housing for key workers, and was built in 2006-7.  Six of the houses are hung with cedar shingles while the other four have zinc cladding, contrasting with the concrete podium, which is painted rust red. The name refers to the Garrick Theatre, which stood nearby from 1830 to 1881 on land now occupied by Leman Street police station. The site, which previously consisted of 31-39 Scarborough Street and 3-7 East Tenter Street, was combined as a 3-storey office building in 1968.

Tucked behind eight early Victorian houses at 31–39 Scarborough Street and 3–7 East Tenter Street was Scarborough Street Synagogue. On a typically constricted site, tucked well out of view at the end of a narrow cranked passage, and directly behind Nos 31–33, this synagogue was built in 1872, consecrated in 1873 and possibly enlarged around 1890. The congregation was a successor to the eighteenth-century Gun Yard ‘Polish’ Synagogue. The brick building was orientated east–west, its north wall backing onto the garden of St Mark’s vicarage at 29 St Mark Street. The interior was top-lit, with a ladies’ gallery to accommodate fifty, and spaces for ninety men below. Lewis Solomon assessed it for the Federation of Synagogues as a decent building, if cheap, but amalgamation with Great Alie Street Synagogue in 1923 was partly occasioned by the building’s failure to meet safety and sanitary standards. The disused synagogue remained extant into the 1960s.1

The eight houses and the synagogue were cleared and replaced around 1968 with a three-storey office building that was used by the Department of Health and Social Security, in part at least to receive benefit claimants. In 2004 Sladewick Properties Ltd proposed replacement of this building. An initial scheme for a five-storey building designed by Deborah Parker Architects was withdrawn and followed by a different project from Davy Smith Architects (Stephen Davy and Peter Smith), proposing ten three-bedroom houses over ground-floor commercial and parking space. This was built in 2006–7 as Garrick Court, the name deriving from the Garrick Theatre that had stood in the nineteenth century a short distance to the north on the other side of East Tenter Street. Construction involving Archer-Hoblin Ltd and Rosebank Building Ltd for Paddington Churches Housing Association, later Genesis Housing Association, was as ‘affordable’ housing for key workers. Six of the houses are hung with cedar shingles in echelon array facing East Tenter Street, the other four have zinc cladding to Scarborough Street, all on a concrete podium contrastingly painted rust red.2 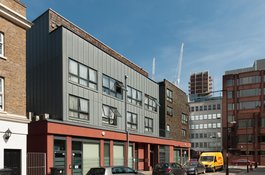 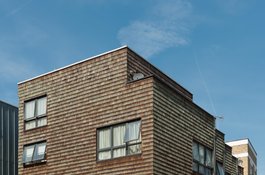 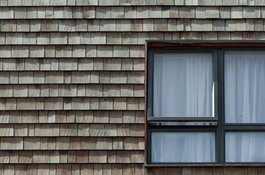