S Karir and Sons Ltd, 2 Brick Lane
Back to MapContribute

c1955 shop and flats. First developed in the 17th century, this was the site of the Three Compasses public house by the 1780s.

The southern stretch of Brick Lane in the parish of Whitechapel was solidly built up with small houses in the middle decades of the seventeenth century. By the 1780s the Three Compasses public house was on the site of 2 Brick Lane, on the Old Montague Street corner. It had gone by 1919 when there were plans for a large cinema development on the site and up to Finch Street, but these came to nothing. Instead, 2–24 Brick Lane were rebuilt in the 1920s by William Barford. An early occupant of No. 2 in the 1930s was Morris Bloom,  a Lithuaninan immigrant ‘sausage manufacturer’, expanding from his first premises further north on Brick Lane, and before Blooms gained renown for kosher dining on Wentworth Street and Whitechapel High Street. Further north there had been rebuilding in the years around 1900, including by Davis Brothers at Nos 32–34. Nos 2–12 were cleared after bomb damage, and lesser damage further north was repaired. The present group of buildings at 2–12 Brick Lane and 1–5 Old Montague Street was early post-war reconstruction, built around 1955 with plain brick elevations in three and four storeys for flats over shops. The development incorporated 2 Hopetown Street as a reconstructed survival from William Barford’s development of the 1920s.1 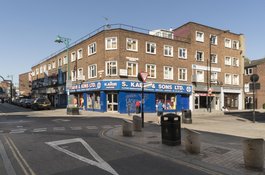