2 Whitechapel Road with 40 Adler Street
Back to Map

2 Whitechapel Road with 40 Adler Street
Contributed by Survey of London on June 27, 2016

Buck & Hickman, saw and tool makers, had this corner site from 1860–1. Matthew Buck, a Sheffield sawmaker, had come to London by 1825. In 1827 his daughter, Ann Buck (1806–95), married John Roe Hickman, said to have been a printer. In 1835–6 the couple took premises in (White) Church Lane, on the east side where the block called Naylor West now stands, from where they traded as Buck & Hickman, sawmakers, perhaps retaining Ann’s surname because the Buck family had established its name at saw- and tool-making premises in Newgate Street, Tottenham Court Road and Lambeth Marsh. John Roe Hickman died in 1847 and a son of the same name moved the saw and tool-making business to larger premises on the Whitechapel Road and behind along Union (Adler) Street that included a steam grindery. The company won government contracts and expanded further, nearby and with engineering works in Vallance Road in the 1880s, supplying tools to many east London manufacturers. 1

Hickman redeveloped the Whitechapel Road corner in 1887 for shops, offices, warehousing and a keeper’s apartment, and built a tool warehouse along Union Street in 1897 by when the business had moved into the mass-production of machine tools. In 1904 the second John Roe Hickman died, the chairmanship passing to a third. Whitechapel became the head office of a firm with outlets in several other cities. During the First World War the Buckman Engineering Centre was established in the Adler Street premises in collaboration with government ministries to train ex-servicemen. Charles George Twallin, a son- in-law with training in banking and finance, became Managing Director when the third John Roe Hickman died in 1921 and ran the firm up to 1963. Much of the rest of the Whitechapel Road block up to the Bell Foundry, was taken and redeveloped by Buck & Hickman in the interwar period. High-explosive and flying bombs landed on Adler Street in September 1940 and 1944 and fire bombing on 29 December 1940 caused extensive damage on Whitechapel Road. The corner was redeveloped with the extant five-storey brick-faced and steel- framed office range in 1958–60, to plans by Browett, Taylor & Co. (R. E. J. Chew, architect), with Holloway Brothers (London) Ltd as builders 2 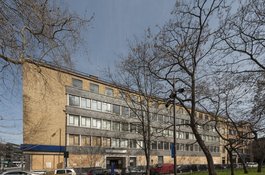 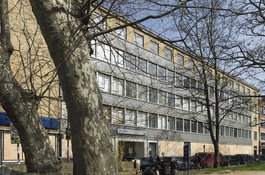 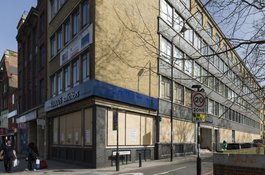 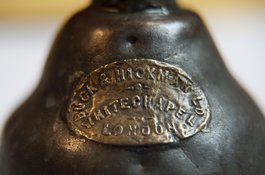 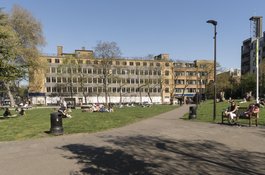 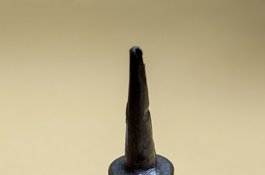