1874, school and mission hall, adapted in 1958 to be Church House, a refuge for prostitutes

There appears to have been no enclosure of the outer perimeter of Wellclose Square’s garden before about 1720 when a dwarf wall with wooden palisades was put up at the expense of inhabitants, to prevent the square being ‘frequented by idle and disorderly persons’.1 By 1773 the square was ‘surrounded by a handsome wall adorned at equal distances with iron rails.’2 This does not seem quite to describe the chunky walling that existed in 1845. Perhaps another reconstruction had occurred, though ‘handsome’ is of course subjective. Engraved views indicate that the present continuous cast-iron railings were part of the school-building project of 1869–70. They saw considerable reconstructive repair in 1950 after war damage.3

By the 1790s the Phoenix Fire Insurance Company, for which the square had been developed in the first place, had put up a fire-engine house at the middle of the north side of the square’s enclosed garden.4 There was a cottage or garden lodge in the corresponding position on the south side of the square by the 1840s, owned by the parish and sometimes used to house the assistant clergy of St Paul, Dock Street. It stood until the 1950s and its rents helped to support the school. The freehold of the square itself pertained to St Paul, Dock Street, by 1920.5

Within a year of the opening of St Paul’s Schools in 1870 it was recognised that attendance was adversely affected by the need for older children to stay at home to look after younger siblings in families where wages were precarious, both parents having to work to get by. Further, infant mortality was disgracefully high. Adaptation of the now redundant fire-engine house on the square’s north side for a nursery was considered before early 1872 when the Rev. Dan Greatorex led the way with plans to redevelop the site to build a new infants’ nursery, or crèche, for sixty to eighty ‘babies’. To this would be attached a kitchen (with provision for use as a soup kitchen for the poor or in times of distress), a mission room, a room for ‘mothers’ meetings’ where women would be taught to make clothing, a storeroom for second-hand clothing, and accommodation for a nurse and mission woman. Among Greatorex’s new collaborators were Thomas Morrison Fairclough, General Lord William FitzGerald De Ros (1797–1874), who had been Captain of the Yeomen of the Guard and otherwise held rank at the Tower of London, and Lt. Col. Francis William Newdigate, whose wife, Louisa Georgina Newdigate, took a lead in the raising of funds through concerts in the West End and at the Mansion House.6

The elderly General De Ros involved himself closely with building design, declaring, ‘I am very suspicious of architects and Portico builders who are apt to waste the funds on what they consider ornaments.’7 He invoked experience acting as his own architect in Ireland, and prepared sketch plans for a single-storey cottage orné, also proposing to involve his ‘<u>very clever</u>’ Clerk of Works, R. M. Leish, who did look things over. De Ros again deprecated architects, ‘they are generally so anxious to build for shew, and their own credit for taste, that I own I have not much faith in them, where ability and economy are the chief objects’.8

In the event, it was again Greatorex’s brothers, Reuben and Simeon, who were brought in as architects, this time with Henry Botting as the contractor, working with G. E. Weston. Louisa Newdigate laid the foundation stone on 10 February 1874 and the Duke and Duchess of Edinburgh ceremonially opened the building on 23 June 1874. De Ros’s parti had been taken on board, wrenched into harmonising with the simple Gothic of the schools, while introducing strong asymmetry and latticed casement windows. The nursery, entered from the school’s grounds, was above the mission room and store, entered from the street. There was a double attic, with both half and full dormers facing south. As on the school, dedicatory stones are lettered in relief.9

By May 1875 there were 51 babies on the books, rising to 78 by 1885, daily attendances ranging from 17 to 25. From 1880 the building also accommodated the Wilfred Cottage Hospital, with five beds for children in three attic rooms.10

In 1932 an LCC school inspector reported: ‘Although the neighbourhood is very poor the school site is unusually beautiful. Surrounding the school there is a large garden full of fine old trees which give pleasant shade to the building and create an effect of a country setting remarkable to find in the East End.’11 Humphrey Jennings echoed this appreciative tone in the early 1940s when, while filming Fires Were Started, he noted the ‘charming’ school, in use as a fire-station, and the square ‘which for all the world looks like Vermeer’s view of Delft.’12 Two huge plane trees still stand on the square’s west side.

The Rev. Joseph Williamson arrived at St Paul, Dock Street in 1952, an energetic reformer and an aggressive publicist. But ‘Father Joe’s’ first project for the nursery building was banal. In 1953 part of the ground floor was converted for Angus Stuart Ltd, a firm based on the north side of the square, for packing sweets and canteen use; Williamson was obliged to obtain permission for this change of use retrospectively. The day nursery continued above until 1956 when it was incorporated into the main school.13

In 1958 Williamson oversaw first-floor alterations to permit the former nursery and mission hall to open as Church House, a refuge ’for the reclamation of prostitutes and girls in moral danger’,14  with accommodation for two female live-in staff. Building work was by R. W. Bowman Ltd and Church House was run through the Wellclose Square Fund Ltd. The first staff, Nora Neal and Daphne Jones, set out to find the girls in cafés. By 1962, 180 girls had been taken in, of whom thirty-four had been returned to their homes, and fourteen found employment. Difficulties were reported in 1970, some of the girls being unwilling to work, some even to be polite.15

Church House closed around 1981, and uses of the listed building since have been varied and short-lived. Permissions for conversions for office and community use below flats have been allowed to lapse. The building was boarded up around 2010 and is empty at the time of writing in 2018.16 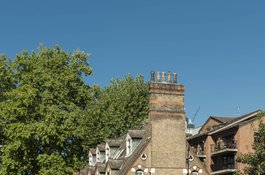 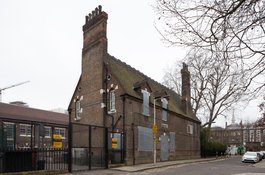 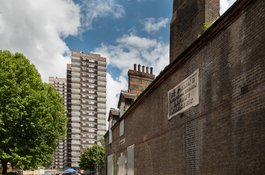 View along north side of Wellclose Square from the west, in 2017
Contributed by Derek Kendall 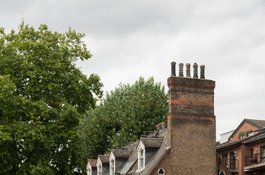 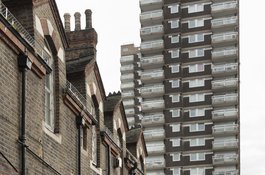 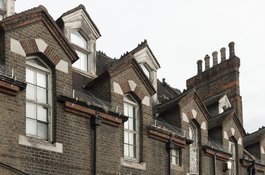 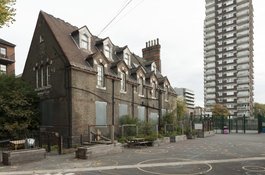 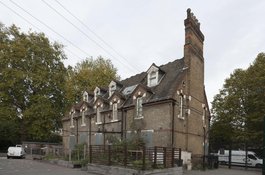 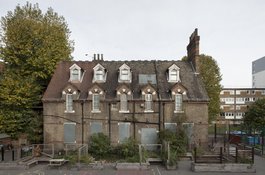 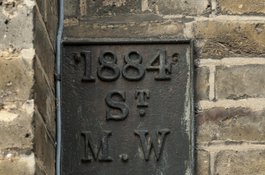