1985–7, offices designed by Hamilton Associates as Juno Court, converted to hotel use in 2005

A building of 1985–7, in use as a hotel, occupies the site of four early houses. That of 1778–81 at No. 24 (previously 9 Magdalen Row) was replaced in 1928–9 by the Oblates of Mary Immaculate, the order of priests that founded English Martyrs, to be a convent for the Sisters of the Immaculate Conception, a branch of the Holy Family Bordeaux, who had since 1880 moved gradually westwards along Prescot Street, from No. 10 to the County Court to No. 17, ever closer to English Martyrs’ Catholic Church. J. S. Gilbert, of Norton, Trist & Gilbert, architects, and J. & R. Thompson Ltd, Acton builders, were responsible for this four-storey red-brick building, embellished with a figure of the Virgin Mary in a niche above the arched doorway. A rear wing had a first-floor chapel above a kitchen.1

A three-storey house with a garret in a steeply pitched hipped roof, perhaps in part still a building of the late 1680s, stood at No. 25 into the 1980s. There may have been some rebuilding upon the grant of a thirty-one-year lease in 1746. The house had a tightly wound twin-newel staircase with both column- on-vase and barley-twist balusters and there were angle fireplaces in the back rooms. A Captain Hicks had the house on this site in 1693–4. Captain Jasper (or Gaspar) Hicks (d. 1714), the captain of HMS Kingfisher who in 1704 was involved in the capture of Gibraltar, held this house in the early 1690s.2 A heavily quoined door surround was probably late eighteenth century and the front wall was seemingly rebuilt in the nineteenth century. There was a substantial rear extension by the 1870s and a long window was inserted for an attic workshop. The house had been inhabited in the 1840s by Moses Magnus, a merchant, followed by Louisa Daeffner, from France, who kept a boarding-house. After a decade of dereliction, No. 25 was a presbytery for English Martyrs from the 1870s to the 1920s. Thereafter it housed tailoring workshops until the 1960s.3

On somewhat narrower plots, Nos 26 and 27 were of unequal rateable values through the eighteenth century, and appear to have been rebuilt as a mirrored pair around 1800. In the 1840s and ’50s No. 26 was the home of Barnard Morris (1796–1880), the German immigrant cigar maker whose factory was on Half Moon Passage. His son, Philip Morris (1835–1873), after whom one of the world’s largest tobacco companies is named, grew up here. These houses were also homes to a coal merchant, a smith, and Jacob Salomons, secretary to the Hambro Synagogue.4

A large presbytery and community house for the Church of English Martyrs replaced this pair in 1881. The Oblates purchased Nos 26 and 27 in the late 1870s, Father Robert Cooke arguing that ‘the number of foreign Catholics of all nations and languages who sojourned for a time in the neighbourhood of the church … would more frequently avail themselves of the ministrations of the clergy if they could more easily ascertain where they resided’.5 The Carthusian Order made a substantial contribution to the building fund in memory of the Order’s eighteen monks, most from the Charterhouse, executed at Tower Hill in 1535–7. Designed by Pugin & Pugin (Cuthbert Welby Pugin and Peter Paul Pugin), the presbytery of 1881 was built by Kelly and Son of Highgate. It lacked any of the architectural ambition of the adjacent church, a plain four-storey and basement stock-brick façade lifted only by blue-brick stringcourses and a pointed entrance arch. It had seventeen rooms, but was recorded as accommodating only three priests, a visiting preacher, and a cook in 1891.6

The replacement of No. 25 was permitted in 1964, but not taken forward, and then refused in 1971 on grounds of historic interest. But the Oblates, feeling the pinch of reduced income in 1979, proposed redevelopment of the whole site at 24–26 Prescot Street for offices, envisioning a community centre to the rear on Chamber Street where the church had a redundant school building. They commissioned Tim Hamilton of Hamilton Associates, architects, to prepare plans and a postmodern, sharply angular and granite-clad elevation to Prescot Street emerged in 1981. This was well received by the church – ‘very attractive and fits in very well with the Church’.7

But it was only in 1982, when the presbytery at No. 26 was demolished, that the Oblates approached the Sisters about selling the convent at No. 24. The Sisters’ work had shifted from an emphasis on education to low-key community social-welfare projects. It was argued that moving into rented accommodation would better suit their outreach. The Sisters duly gave up the convent and moved to flats in Royal Mint Square, but only on a temporary basis. A proposal for a new convent on Scarborough Street was rejected by the GLC and the Sisters withdrew from the parish. The Oblates needed the income from the site of Nos 24–26 to sustain English Martyrs’ Church. They accordingly decanted themselves from their roomy presbytery to the upper storeys of 30 Prescot Street.8

Building work in 1985–7 appears to have been undertaken by Tarmac, retaining Hamilton Associates as architects. The ‘brashly unpleasant’ office block, named Juno Court,The office block, named Juno Court, which extends across a large site with a plain brick elevation to Chamber Street, was converted to use as a Premier Inn in 2005. A small community centre to the west on Chamber Street followed on.9 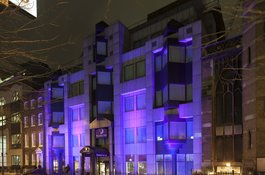 24 Prescot Street in early 2018, from the north-west
Contributed by Derek Kendall 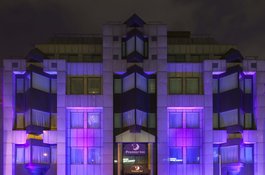 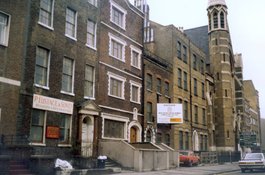 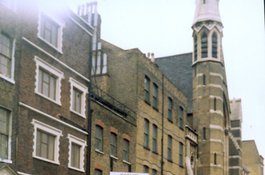 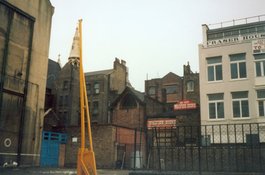 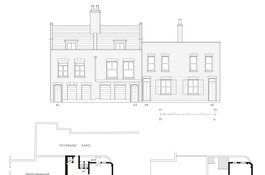