A public house called the London Hospital was built here in 1753 while work on constructing the hospital’s central block was underway. It replaced an earlier building on the site at what was the northwest corner of the hamlet of Mile End Green. The pub’s arrival followed the grant from the hospital’s building committee of a 61-year building lease to Sarah Parsons (1697–1759), the widow of Humphry Parsons MP, a wealthy brewer of the Red Lion Brewery, Aldgate, and ‘extreme tory lord mayor of London’.1 She was also the daughter of Sir Ambrose Crowley, an excessively wealthy Greenwich-based ironmonger and industrialist. She had established links with the hospital while it was on Prescot Street.

Parsons’s tavern had two storeys and a garret and there was a yard with stabling to the rear with access from the west on the side street then called Mount Street. The ground floor of the pub comprised a bar, a tap room, three parlours and a kitchen. The London Hospital’s Building Committee used the new establishment for its meetings from January 1754. The first or an early proprietor was John Cholsey and Noble Reynolds was a successor in 1770.2

Entertainments featured by the 1820s when E. Gilbert, a ‘low comedian’, was the proprietor; he died in the collapse of the Royal Brunswick Theatre in 1828. Despite prohibitions, there are indications that the tavern, under the control of Taylor, Walker & Co. by the 1830s, continued to feature music. Beyond the stabling on East Mount Street, a row of houses came to be called Percival Buildings, after James Percival, a soapmaker who had a factory to the east from around 1810.3 The hospital sold the tavern and adjoining properties, along with others further southeast, to the East London Railway Company from 1866 to 1875 for its line through Whitechapel, constructed by Thomas Andrew Walker under Sir John Hawkshaw, engineer. The pub was cleared, presumably for cut and cover works, and rebuilt in 1875–6. Six houses along East Mount Street followed in 1878, with A. M. Cohen as builder.4

In 1937 the upper parts of the walls were rebuilt, probably replacing a more robust cornice with red-brick bands. A middle partition between the saloon bar and the public bar was moved in 1956 to confine the public bar to the southwest corner. There is no longer any division. In 1966 renewal of a music licence was refused because patients at the hospital were being disturbed by the ‘crushing beat of banjos and drums’.5 The lower levels of the pub’s façades were painted with a tiger-skin effect in the late 1990s for what was renamed the Urban Bar. Around 2013 that décor was removed for a more subdued fascia treatment.6 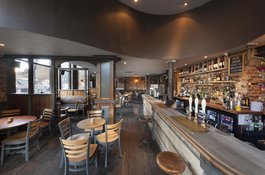 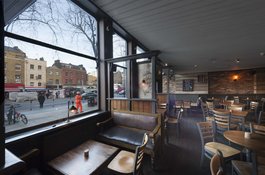 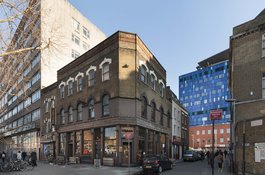 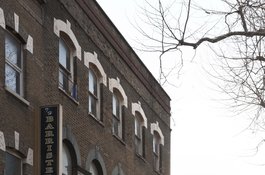 Urban Bar, 176 Whitechapel Road, from the north-east in early 2018
Contributed by Derek Kendall