Whitechapel Mission
Back to MapContribute

Methodist Mission built to designs by Lee Reading & Associates, 1969-71, with chapel to north, hostel to south

The Whitechapel Mission, 212 Whitechapel Road
Contributed by Survey of London on April 26, 2018

The island site at the easternmost end of Whitechapel parish on the south side of Whitechapel Road, otherwise bounded by Cavell Street (formerly Raven Row and South Street), Raven Row (formerly Mile End Green) and Maples Place (formerly Cannon Place), has since 1906 housed the Whitechapel Mission, a Methodist institution dedicated to aiding East London’s homeless, hungry and vulnerable. Its buildings of 1969–71 replaced a chapel of 1866.

Already an island and modestly built on by the 1740s, this site was then part of the hamlet known as Mile End Green. Francis Nettlefold, a coal meter (measurer), who occupied the west part of this site from the 1780s to the 1820s, gained the freehold. The Raven Row (Cavell Street) frontage was built up with small houses in the first years of the nineteenth century by when three shophouses faced Whitechapel Road. That to the centre was rebuilt in 1825, from when there was a carpenter’s workshop behind the Raven Row corner. Charles Bushell, a house painter and ornamental decorator, held the largest property here in the 1830s. To the west on the other side of Raven Row, John Hayward, a floorcloth and carpet manufacturer of Newington Causeway, had established a floorcloth factory In the 1780s. This was adapted for use by lead and glass merchants from the 1840s to the 1880s when the Post Office arrived.1

By 1856 William King, a ‘shop fixture manufacturer’,2 had a substantial part of the island property, including the former carpenter’s workshop, a large room for which he unsuccessfully sought a music licence in 1860. His Whitechapel Road neighbours on the island site were Anselom Jewell, a furniture broker, and Charles Benoni Taylor, a gingerbread-maker. In 1861 King let his room to a Calvinistic Methodist congregation, displaced from the Sion Chapel on the site now occupied by the Roman Catholic Church of St Boniface (see p. xx), where it could not afford a new lease. A fire in 1865 spread across what had become South Street from the former floorcloth factory and ruined the improvised chapel. Rev. John Kennedy solicited a £1,000 donation from Samuel Morley and the London Chapel Building Society and a 90-year building lease was obtained on the condition that two shops with dwellings were built along with the chapel. Thomas Chatfeild Clarke was appointed architect and the cheapest of his three designs, in ‘Simple Gothic’, was selected. The New Sion Chapel was built in 1866–7. Of polychrome brick with mixed stone dressings, the chapel had multi-gabled five-bay returns. A capacity of 1,000 had been intended, but in the event there were seats for only 550, largely because side galleries had to be omitted on cost grounds. This left the aisled interior looking rather gaunt, with a high ceiling above slender iron columns. A half-basement for a school-cum-lecture room had to be finished later for want of funds. The eastern shop became hatters’ premises, the western was by 1890 occupied by a bootmaker.3

Despite income from the shops and a mortgage the congregation found it difficult to keep going. In the 1890s the chapel was taken by Independents and renamed the Brunswick Congregational Sion Church. This too could not be sustained and the whole property was advertised for sale in 1906 with dance- hall or cinema use proposed. Rev. Thomas Jackson, who had established a Primitive Methodist Mission at the Working Lads’ Institute (279 Whitechapel Road) a decade earlier, jumped at this opportunity and threat, and secured the building for his Mission. He could do so because he had funds arising from the forced sale of part of the Working Lads’ Institute site for the Whitechapel and Bow Railway for £20,000. Alterations in 1907–8 for what was now the Brunswick Hall Primitive Methodist Church were overseen by George Baines & Son, architects. They included a lowered floor and a relocated organ.4

What was hereafter known as the Whitechapel Mission used the Brunswick Hall for worship, this being the sole Primitive Methodist establishment in Stepney. In 1923 Jackson inaugurated a ‘Free Night Shelter’ for homeless men (‘Down and Outs’) in the basement school-room. It was used by 250 men in its first week. By 1932, when Jackson died, the shelter had accommodated 8,732 men and supplied 20,780 free meals.5

War damage forced temporary closure of Brunswick Hall until 1949, by when the Mission had out-stations in Tulse Hill and Essex. From 1957 the costs of maintenance inclined the Mission to contemplate closure of the Working Lads’ Institute, for consolidation of its Whitechapel functions in a new building on the Brunswick Hall site. Rev. Arthur E. D. Clipson, Superintendent, pushed this forward and gained support from the Methodist hierarchy, determining that the new building should comprise a church, a youth club, offices, his manse, and a row of shops on Whitechapel Road. First plans were prepared by Trevor Donaldson of Donaldson & Sons, surveyors, and additional land to the rear was acquired from the London County Council in 1963. An eleven-storey tower was proposed, and alongside a long-running funding appeal, some of the costs were offset against the intended sales of 279 Whitechapel Road and the Tulse Hill property. Clipson died in 1964 and Rev. William Parkes saw the project through. Ronald Ward & Partners prepared new plans in 1966, but by 1968, when a low-rise scheme was approved, the project had passed to Lee Reading & Associates (James Harbinson, job architect). The contractors were Marshall-Andrew & Co. Ltd, and the rebuilding was carried out in 1969–71.

The low-slung and angular red-brick clad mission has architectural qualities that are reminiscent of Darbourne & Darke’s Lillington Gardens Estate. It is entered from Maples Place to the south of its chapel, which sits with a raking profile above the lettable shops and comprises one of three distinct pavilions. From early on into the twenty-first century one of the shop units was a sandwich bar. To the centre there are offices and flats, an assembly hall forming a link to the rear block, the four-storey short-stay hostel, built to house thirty ‘needy boys’; it stands above a fenced-in car park. Also towards the rear, a ‘crypt shelter’ was provided to be large enough to sleep six ‘down and out men’.6 Of social work, Parkes said ‘I’d like to see some of these trendy Johnnies identify with an old man who’s got three months to live, who’s blind from hard spirits, and peeing all over the floor’, and of the Mission, ‘If you talk of success here – well, I think you must just find another word.’7 The Whitechapel Mission has continued since 1995 under the leadership of Tony Miller, a lay Director. It maintains its support for the homeless as a day centre. The hostel dormitories were converted to be eleven flats in 1997–8.8

Notes on the Mission site
Contributed by Survey of London on Sept. 4, 2017

Constructed 1969-71 to designs by Lee Reading & Associates, 212 Whitechapel Road has long been associated with the The Whitechapel Mission. Its history can be traced back to the late eighteenth century when the Countess of Huntingdon funded the purchase of a former theatre building in order to precipitate its conversion into the Sion Chapel for her Connexion (a non-conformist group of Calvinistic Methodists). Situated on the site of present-day St Boniface, this congregation's occupation of its first building continued into the 1860s. Following relocation to this site the 'New' Sion Chapel was built facing on Whitechapel Road in 1866–7. Following a transfer to a group of Independents in the 1890s the building assumed the name Brunswick Congregational Chapel. In 1906 it was sold to the Primitive Methodists for use by the Whitechapel Mission which from the 1920s provided night-time shelter for homeless men here. The present building originally comprised a chapel above shops, an assembly hall, offices, a hostel and a basement shelter for down and outs. The hostel has been converted to flats, but the mission continues to serve the area's homeless. 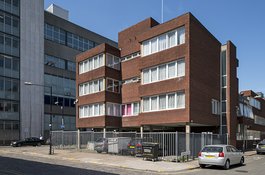 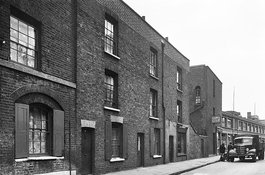 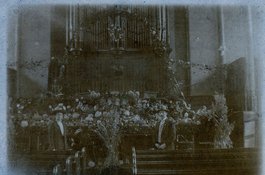