Blizard Building
Back to MapContribute

The Blizard Building occupies a large site bounded by Newark Street (north), Turner Street (east), and Walden Street (south), abutting west to the Abernethy Building and the Bioenterprises Innovation Centre. It was built in 2003–5 to provide a distinctive medical research centre for Queen Mary University. It was designed by Will Alsop in collaboration with AMEC, with Adams Kara Taylor as structural engineers. The building contractors were Laing O’Rourke.

The Blizard Building is composed of two rectangular glass-clad steel-framed pavilions east and west, separated by a central yard. These discrete monolithic and somewhat Miesian blocks are connected at first-floor level by a slender bridge encased in panels of bright pink and red glass. An extensive basement engulfs the larger part of the footprint of the site. The sleek glass cladding of the pavilions is punctuated by a series of colourful panels designed by the artist Bruce McLean, incorporating words chosen by Professor Mike Curtis and Professor Fran Balkwill, scientists based at Barts and the London School of Medicine and Dentistry. The building is named in honour of Sir William Blizard, the eminent surgeon and one of the founders of the medical college that opened at the London Hospital in the 1780s.

The east pavilion comprises offices and study spaces skirting a large void, filled by four pods of pioneering constructional complexity, each ‘playful, curvaceous, hollow and equally outlandish in different ways’.1 Supported by a series of steel props and suspended steel hoops, Centre of the Cell _is a two-storey children’s educational unit and exhibition space encased in an orange bubbling structure inspired by the nucleus of a cell. Its smooth surface contrasts markedly with _Spiky, a prickly steel-framed structure zipped in a black PVC-coated polyester membrane. Both structures were designed and assembled in collaboration with Architen Landrell. Design & Display was contracted to deliver Cloud, a steel-framed elliptical structure raised on steel legs, and Mushroom, an open deck supported by three vertical concrete posts. _Cloud _and _Spiky _contain spaces for seminars and meetings, while _Mushroom _was designed as a social area adjacent to the staff entrance. The narrow west pavilion contains a double-height glass-fronted entrance foyer with a café. Service plant in the upper four storeys of this pavilion is enveloped in a utilitarian louvred exterior. To the north-west there is a ground-floor lecture theatre with tiered seating for 400. The extensive basement of open-plan and separate laboratories receives natural light from circular skylights in the yard; there is also a light well in the east pavilion.

_Neuron Pod _was constructed at the north end of the yard in 2018–19. Accessed via the central glazed bridge, this structure provides space for educational workshops, events and exhibitions. Designed by Alsop to represent a nerve cell, and carried out posthumously, the steel-framed structure rests on three legs, its body encased in a steel skin sprouting ‘hairs’ fitted with lights. Alsop’s practice, aLL Design, collaborated with AKT II, structural engineers, Total Construction, and Littlehampton Welding, the steel sub-contractor. Thirteen large prefabricated sections of the external shell were assembled on- site. The structure was designed to avoid the need to carry out disruptive works to construct foundations or strengthen the basement. There are plans to halt the rusting of the steel façade after it has weathered sufficiently.2 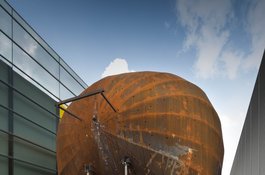 Neuron Pod under construction in 2018, view from the north
Contributed by Derek Kendall 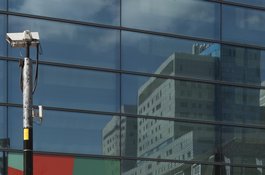 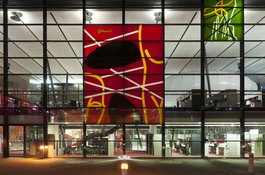 The Blizard Building in early 2018, detail of east range
Contributed by Derek Kendall 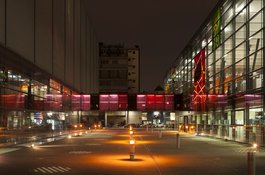 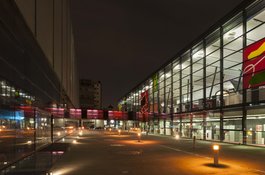 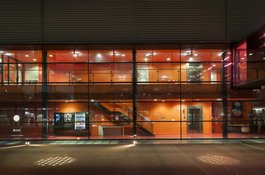 The Blizard Building in early 2018, detail of west range
Contributed by Derek Kendall 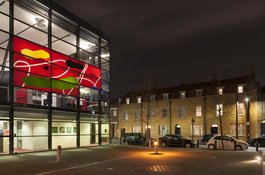 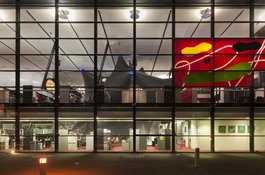 The Blizard Building in early 2018, detail of east range
Contributed by Derek Kendall

Neuron Pod in course of construction, May 2018
Contributed by Derek Kendall 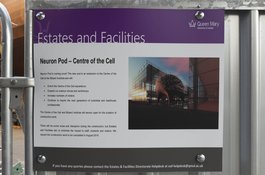 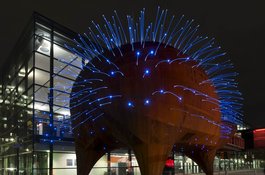 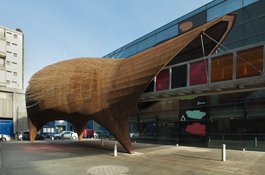