The Nag's Head, 17-19 Whitechapel Road
Back to MapContribute

c1932, public house replacing a 17th-century or earlier coaching inn that had a galleried yard

The Nag’s Head Inn has early origins, how early remains unclear, but it was certainly on its present site by 1703, possibly long since; its main-road site is immediately opposite that of Whitechapel's medieval church. The inn later became the Nag’s Head and Woolpack, and was then improved by Thomas Whitehead around 1770 before becoming a Barclay Perkins establishment. There was a timber-built galleried range to the rear, very likely that depicted by William Bell Scott in 1842 (see https://nationalgalleries.org/art-and-artists/11869 /courtyard-inn-whitechapel-london?artists[15135]=15135&search_set_offset=3 4). The livery stable yard of what had become a coaching inn extended back to Old Montague Street (see https://nationalgalleries.org/art-and-artists/11868/courtyard- stable-whitechapel-london-dated-1842?artists[15135]=15135&search_set_offse t=33). Access from Whitechapel Road was on the inn’s west side. The brick-built inn was described as ‘old’ around 1915 when Lazarus Leber was the resident victualler. The stable yard (for thirty horses, and run by Abraham Levy) was still then faced by a gallery, ‘old wood buildings’ and a six-room cottage.1 Neo-Georgian rebuilding is probably datable to 1932, most likely to designs by F. G. Newnham, Barclay, Perkins & Co.’s house architect. An upper storey and the westernmost bay of the four-bay front were taken down after war damage and the west bay was reconstructed in 1959–60. Even so, that this was the site of the former yard entrance can still be discerned. In recent times, over a period the length of which has been disputed, the Nag’s Head has operated as a strip club.2 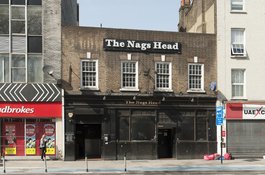