John Harrison House
Back to MapContribute

Ten-storey block of flats with a Y-plan, built in the 1960s.

This ten-storey Y-plan block was built to designs by Bennett & Son, architects, and Oscar Faber & Partners, consulting engineers. Named in recognition of one of the founders of the infirmary in 1740, this tower block contained more than 220 bedsitting rooms for nurses and administrative staff. At its completion in 1964, each wing had a central corridor lined with bedsitting rooms with shared balconies. Communal sitting rooms, kitchens, utility rooms and lifts were located at the central juncture of the corridors. The reinforced-concrete frame is concealed by inward-facing balconies and sheer expanses of brickwork on the side elevations, which ascend to a rooftop terrace. The block has largely been converted to administrative offices for the hospital.1 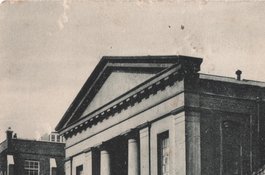