Morrison Buildings North, 35a Commercial Road
Back to Map

Morrison Buildings, 35A Commercial Road
Contributed by Survey of London on June 24, 2016

This block of dwellings was built in 1873–4 for the Improved Industrial Dwellings Company, which often took plots generated by street improvements. Construction was overseen by Matthew Allen, the Company’s usual ‘architect’, though it was significant that he was in fact a builder–contractor. Sydney Waterlow set up the Company in 1863 and its first blocks were based on Henry Roberts’s design for cottage flats exhibited at the Great Exhibition of 1851.

Morrison Buildings, which comprise thirty flats, are transitional to a later standard type of a starker and Italianate nature. In retaining the open balconies that were characteristic of the early blocks, this is among the more attractive surviving examples of IIDC architecture, even though the stock- brick street elevations have been painted. To keep costs down Allen used prefabricated artificial-stone and concrete dressings and fittings, patent reinforced-concrete floors and joinery imported ready-made from Sweden. Another and larger contemporary IIDC block (Morrison Buildings South, 54 flats) stood opposite at 60 Commercial Road until the 1970s. 1 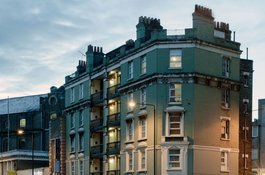 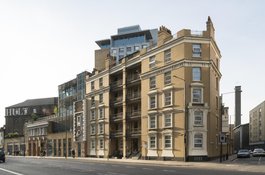 Morrison Buildings North, 35A Commercial Road, from the south-east in April 2017
Contributed by Derek Kendall 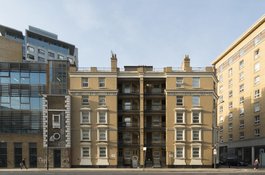