Capitol House
Back to Map

c.1990 neo-Georgian offices on the site of two earlier houses

This late twentieth-century neo-Georgian office block replaced a pair of three-storey early nineteenth-century houses that succeeded an unequal early eighteenth-century pair that was unified in the 1760s and ’70s for the Rev. Daniel Noble, a Minister of the General Baptist congregation that moved from the Mill Yard chapel to the south side of Church Lane (where it became part of the Commercial Road) in 1763. He kept a well-regarded academy where Thomas Paine, the radical activist, briefly taught in 1766. The academy’s Leman Street situation was advertised as ‘very airy’, but it had closed by 1800 and rebuilding ensued. The early nineteenth-century houses were occupied by a number of manufacturers, with tenants who notably included Joseph Solomon Spyer and David Mocatta, associates of the Goldsmids, who were next door in the house on the site of No. 64. For a spell in the 1840s No. 62 housed George Smart, a ‘Professor of Dancing’. In 1884, No. 60 had a shopfront inserted and a back warehouse was reconstructed. Alterations of 1923 may have included an additional storey at No. 60, then in long-standing use as a hairdresser’s, but that had been removed by the 1970s. No. 62 was occupied by a doctor’s surgery for many decades.1

No. 62 gained Listed status in 1973 and an application to convert the pair into offices was approved. But proposals for a wholly new four-storey office block followed, first to designs produced by Michael Rayner & Partners in 1976, then by Elsom, Pack and Roberts Architects in 1980. These were not taken forward and a third scheme instigated by Demos Ciclitira Ltd, a currant- importing firm, with Keith Roberts and Associates as architects, was approved in 1986. The resultant stock-brick-faced office block was constructed by Mansell Ltd. Its artificial-stone pedimented doorcase, stringcourse at first- floor sill level, and precast cornice are reminiscent of the house at 66 Leman Street, presumably conscious pastiche.2 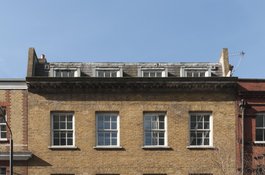