64 Leman Street
Back to MapContribute

1922–4, former Federation of Synagogues headquarters, site of a late 17th-century house lived in by the Goldsmid family of financiers

A three-storey mansion on this site, probably built around 1690, with basements, attics and a warehouse, was occupied from the 1730s by Joseph Phillimore (d. 1762), a clothier, and his son, John Phillimore, a wealthy City silk throwster who moved to the house at No. 66 in 1766. Around 1769 Aaron Goldsmid (d. 1782), an eminent Dutch-Jewish merchant and financier, took up residence, having migrated to London from Amsterdam around six years earlier, with his wife, Catherine de Vries, four sons and three daughters. The eldest son, George, became a partner in 1771 and the other three sons, Asher, Benjamin and Abraham, also became prominent and innovative financiers.1 The house hosted a number of spin-off family businesses and wider partnerships, and several other houses in the area were implicated with enterprises initiated by the Goldsmids in their ‘modest Leman Street days’.2  Benjamin and Abraham Goldsmid went into partnership in 1776, first as merchants, then as financiers who established themselves as the City’s first specialists in bill broking, working from this address until 1792 when they relocated to the City from where they played a critical role as loan contractors during the French wars. George Goldsmid carried on from Leman Street until his death in 1813, in partnership with his brother-in-law, Daniel Eliason.3

Thereafter Leman Street could no longer attract wealthy residents. For a few years in the 1820s, No. 64 was used as the Whitechapel Watch House, then, after the formation of the Metropolitan Police, it was converted in 1830 to be a police station and section house for H Division, covering Stepney. By 1849, the police had acquired new premises, adapting houses further south along Leman Street, and No. 64 was converted to use as a cigar and then a gun factory. For a short time at the end of the nineteenth century, the building temporarily rehoused the police while their station was rebuilt. It also accommodated various charities involved in local social and youth work, including the Metropolitan Association for Befriending Young Servants, which operated under the supervision of the Rev. Samuel and Henrietta Barnett. By 1910, the building was back in commercial use, occupied by Abraham Friedman, a cap and hat manufacturer. The early house was partially rebuilt in 1917 only to be demolished five years later.4

Its place was taken in 1922–4 by a neo-Georgian building. Originally of three storeys, this was erected by and for Israel Joseph (Joe) Galinski (1899–1973), the eldest son of (and no doubt working with) David Galinski (_c._1873–1967), a Lithuanian immigrant who had established himself as a cow-keeper in Spitalfields and diversified into building and property speculation. By 1925 the Federation of Synagogues had taken the building to be its headquarters. It is possible that there was earlier involvement on the part of the Federation, and thereby of Digby Lewis Solomon, who followed in his father Lewis Solomon’s footsteps as the Federation’s architect and was running the family practice, Lewis Solomon and Son, by 1923. The five-bay Leman Street elevation mixes yellow-stock and red bricks on the upper floors under a projecting cornice. The ground floor, now painted white, was given especial prominence with four widely arched openings articulated by tiled pilasters beneath an entablature. Sometime after 1970, a further storey was added with matching brickwork.5

The Federation of Synagogues, which had been established in 1887, represented and supported numerous small synagogues, mostly located in Whitechapel and Spitalfields. This building allowed all the Federation’s functions to be centralised and housed under one roof for the first time. A lively place of debate and deliberation during a time of frequent amalgamations, the Federation’s offices continued here until 1974 when they moved to new purpose- built headquarters on Greatorex Street. No. 64 has since been used as offices by other organisations.6 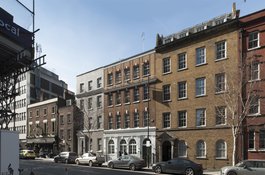 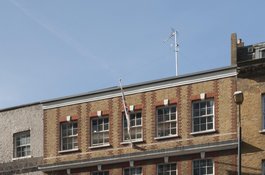