44–50 Leman Street
Back to MapContribute

In front of Black Horse Yard stood a row of four early shophouses. That to the north was held by 1721 and into the 1740s by Thomas Spooner, the author of A Compendious Treatise of the Diseases of the Skin; from the slightest itching Humour in particular Parts only to the most inveterate Itch, stubborn Scabbiness, and confirmed Leprosie (4th edn, 1721) and A short account of the itch (6th edn, 1728). The group of shops was rebuilt in the early nineteenth century and came to house workshops. Late nineteenth-century occupants included a shoemaker, a clockmaker, and a whitesmith, many of those resident were of German extraction. There was also a long-running ladies’ school in the charge of Elizabeth Bass. By 1880, John Miller, the carman at the stabling behind, had Nos 44–46 as his offices. After bomb damage, Nos 46–50 were replaced around 1950 by a utilitarian single-storey store and office built by and for J. Jennings & Sons. The whole site, including the yard, was redeveloped as a five-storey office block in 1988–9 by Rockfort Land to designs by C. A. Cornish Associates. The deep-plan concrete-framed building is clad in red and yellow stock bricks in a somewhat playful Postmodern manner, a symmetrical composition of primary shapes. Windows that can be read as Serliana, with arched heads, are interspersed among rectilinear tripartitite windows, descending in number from the top and bottom storeys so as to highlight a central first-floor door and balcony.1 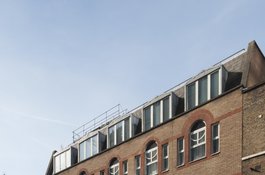