52-56 Settles Street
Back to MapContribute

Davis's Terrace and the Davis Brothers
Contributed by IsobelWatson on July 7, 2016

Israel & Hyman Davis were two of the seven builder brothers Davis. Of the brothers, only these two ever used the trading name ‘Davis Brothers’ (though sometimes their brothers’ buildings have been attributed to them.) Like their father, Woolf, and elder brothers Maurice and Abraham, Israel and Hyman had started in the fur trade. They appear first to have first won a building lease from the London Hospital 1 (like others before 1903, granted only for 60 years) in Settles Street (40-72 even, ‘Davis’s Terrace, 1890’) by tender. Then (when the Hospital’s experience of its in-house redevelopment of Parfett Street to the east, after a closed competition, had been disappointing) another lease for a red brick terrace, 10-28 even, south from Fordham Street, from 1899 .2 The two terraces seem to embody two distinct phases in architectural development, and it is interesting to note that between the two phases of building the youngest brothers, Nathaniel and Ralph Davis, the only ones of the seven known to have had any formal training, had started their own business. 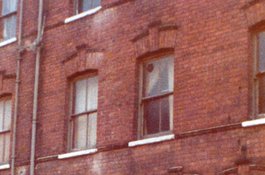