31 St Mark Street
Back to MapContribute

Almost nothing of the early Victorian Tenter Ground estate survives, the exception being the former Scarborough Arms public house and two adjacent former shophouses at 31–35 St Mark Street, the houses rebuilt in 1993, but retaining their original form in a three-storey plain stock-brick group that is unified by a cornice. The pub was up and running by 1851, and was managed by landlords of German origin for much of the rest of the nineteenth century. It closed in 2011 and was converted to be ten flats in a project by Scarborough House Ltd with Clements & Porter Architects. Both the adjoining shophouses were run by William Chandler in 1860, as a grocery and a bakery. In the early 1930s No. 31 was a chandler’s shop, and No. 33 still a bakery, run by Mrs Ada Cohen.1 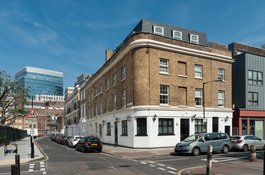