1904, row of five shallow lock-up shops, Henry Florence, architect, the site of the Angel and Crown public house in the 18th century | Part of 303-317 Whitechapel Road

Earlier buildings on this site were varied and repeatedly rebuilt. In 1670 John East, a citizen blacksmith, took a 500-year manorial lease of a 100ft frontage of waste corresponding to Nos 307–317. There was a house on the site of No. 305 from about 1675 when a comparable lease was granted. The Queen’s Head on the Ducking Pond Lane (Brady Street) corner (No. 317) was so named by 1730, when William Goudge was the landlord and the vicinity of the Ducking Pond was thickly built up. It was rebuilt after a fire in 1781 and sometimes known as the Queen Elizabeth’s Head. Another pub on the site of No. 307 was known as the Angel and Crown, then the City of Norwich, then the Little Driver, all before adaptation by 1840 to be a private house and shop.1

The present buildings at 303–317 Whitechapel Road are a single development of 1904 carried out for the Whitechapel & Bow Railway Company which had acquired the earlier properties along this front to extend the District Line eastwards from Whitechapel, taking a route that cut under and left very shallow development sites at Nos 305–315. Henry L. Florence was the railway’s architect through the design stages. After his retirement his successor, Howard Chatfeild Clarke, saw the project through with Ford & Walton Ltd as builders. There are red-brick elevations to dwellings over the two shop units to the west, with an arcade continuing across five shallow lock-up shops on what is in effect a bridge, with scrolled upstands above the parapet. At No. 317 on the corner the front part of the nineteenth-century Queen’s Head public house was replaced, in brown brick with stone dressings and at a larger scale than its predecessor. The three-bay section to the rear facing Brady Street survived from a two-shop redevelopment of 1886, Hearle and Son the builders. The pub had closed by 1950. Solomon Bressloff & Son, boot dealers, were at No. 303 from the 1940s to the 1980s – ‘Bressloff & Son Ltd’ survives on the arch spandrels.2 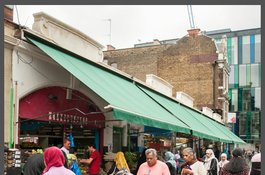 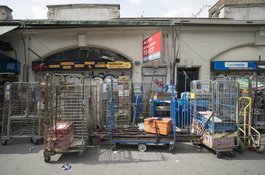