This is a rare example of a City-overspill speculative office block that has been roundly applauded by the architectural press. Built in 1990–1 as Insignia House, it is striking for its innovative glass curtain wall and High-Tech coolness, particularly given the polyester-suit Postmodernism of its immediate neighbours.

This was not the best end of Mansell Street in the eighteenth century, but even so there was yet another wide-fronted mansion on this site. With proximity to Goodman’s Yard the location was attractive to merchants. John Eaton Dodsworth, a director of both the Bank of England and the East India Company, for which he had supervisory responsibilities in Persia (Iran), had a house on this site by 1733 until his death in 1759.1

In the nineteenth century, the large house was principally a warehouse for cigars and cork, with apartments above. Its smaller southerly neighbour also functioned as a warehouse and dwelling. Numa Edward Hartog (1846–1871), a campaigner for Jewish rights, was born there. David Jameson and Baruch Jameson, pen and quill merchants, acquired its freehold in 1882, having been lessees for a decade. In 1890 they redeveloped No. 85 as a five-storey warehouse, designed by R. W. Hobden, architect, and built behind a single- storey forecourt shop. David Jameson, who was President of the Soup Kitchen for the Jewish Poor, lent the new warehouse to the Jewish Working Men’s Club and Institute while its Alie Street premises were rebuilt in 1891. Already linked in use and occupation, Nos 83 and 85 were formally united in 1935 with openings formed in the party wall.2

The buildings were destroyed during the Second World War and a number of development schemes followed. A five-storey warehouse and office went up in 1964 to designs by Gilbert Laurie Cadell. Dean & Wood, refrigerating engineers, were occupants.3

After a failed proposal to convert the warehouse into offices, in 1988 Golbourne Developments put forward plans for a new six-storey building designed by Elana Keats & Associates and John Winter & Associates (Jonathan Ellis Miller, job architect). A plan to widen Mansell Street in the early 1960s had led to the stipulation that new buildings should be set back from the street line by three meters. The road widening had been abandoned, but developers were still required to leave the space fallow. The plans for Nos 83­–85 responded to this constraint by arranging floor plates to meet the imposed building line, with independent office spaces on each level behind curtain glazing and a canted central setback. In front, this was all screened by a glass atrium out on the pavement that created a thermal and acoustic barrier. This was praised as a contribution to the public realm, a ‘technological coup de théâtre of a glazed box crisply enclosing the building like a six-storey display case’.4 Ove Arup & Partners, the project’s structural engineers, developed a customised glazing system and incorporated two trussed tubular-steel towers, visibly featured behind the clear glass façade. A top-storey glass conservatory is set back so as not to interfere with the effect of the main glass box. On the simpler West Tenter Street elevation, where the floor plates more conventionally meet flat glass walling, upper levels are also recessed. Internally, services are pushed to the south behind the lift and open floors are otherwise only interrupted by a row of cylindrical columns near the north wall. The lower levels were made a Job Centre in 2011, discreetly entered from West Tenter Street.5 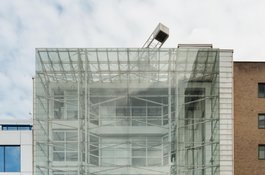 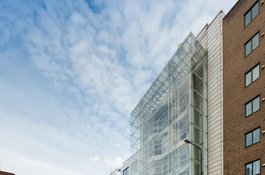 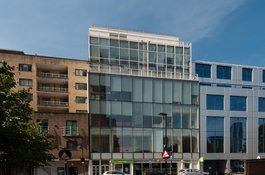