257 Whitechapel Road
Back to Map

The site of 255–259 Whitechapel Road was developed or redeveloped around 1675 when a 499-year manorial lease was granted. There are still buildings of a humble early scale here, perhaps with early nineteenth-century origins, though little old fabric appears to survive. Occupants of No. 257 have included Matthew Abley, an oil and colour man, around 1840. There was reconstruction after a fire in 1881. The building was extended back in 1936, and further rebuilding took place around 1975. The façade’s brickwork was re-exposed around 2012.1 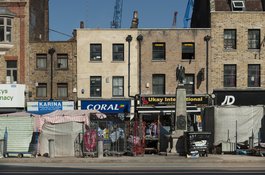