3 Vallance Road
Back to MapContribute

Land near here along what is now Old Montague Street was occupied by a Robert Baker in 1707. He was perhaps a relative of John Baker, a joiner-developer who built houses in the vicinity and further east in the years up to 1689, and to whom the name Baker’s Row for what became Vallance Road in 1896 was probably due. William Vallance was the long-serving Clerk to the Whitechapel Board of Guardians. Curiously or otherwise, a William Vallance of Sittingbourne had a mortgage on adjacent Whitechapel Road properties from 1831. The earlier name applied by the 1740s when there were just a few scattered buildings on the west side. By the 1790s the frontage was fully built up south of the junction with White’s Row (Durward Street) opposite. The Weavers Arms public house (roughly on the site of 13 Vallance Road) was present by 1784 as a three- storey two-bay building. John Wildman, the pumpmaker based at 187 Whitechapel Road, took a 61-year Digby lease of a frontage north of the pub and a narrow passage for a seven-house speculation of 1806–7 in which Major Rohde and Samuel Page were involved, along with John Hammack, a Shadwell carpenter, and William Horncastle, a bricklayer who lived in one of the houses. By this time the King’s Head public house was at the Old Montague Street corner. Further south, Fan Court (five houses) and Maria Court (four houses) were inserted around 1815.1

In 1870 a joint deputation from the Whitechapel District Board of Works and the vestries of Bethnal Green and St George in the East presented a case for the widening of Baker’s Row to the Metropolitan Board of Works, an improvement that had been advanced as desirable since the 1830s. Very narrow (11ft), the ‘road’ was only a footway, impassable by carriages, and a bottleneck for north–south traffic to and from the docks. The local authorities proposed clearance on the west side, where redevelopment was said anyway to be intended. This went ahead, the boards of works splitting the costs of work carried out in 1872–4 with wood paving.2

Donald Munro of the Pavilion Theatre and MBW acquired the whole new frontage at the south end of Baker’s Row’s west side.3 At No. 13 the Weavers Arms was rebuilt in 1873–4 as a four-bay three-storey pub, by Kelly Brothers of Camden Town. Its diagonal north party wall reflects the line of a former passage that gave access to the south-east corner of the theatre. In 1911 Morris Cohen, who had a fried-fish shop across the road, converted the pub to be shops and tenements, with David Goldberg as his builder. Nos 3–11 were built for Munro along with Nos 15–29 in 1873–6, shophouses punctuated for access to the theatre that stood behi. These distinctive rows with their rendered upper-storey arches bearing incised ornament were probably designed by Jethro T. Robinson, who was then the theatre’s architect. No. 9 breaks the rhythm of the arcade; its open ground floor gave access to theatre workshops. Similarly, No. 17 had an entrance to the galleries and No. 27 had the stage door with a tall entrance for the scene dock. Nos 15–29 were demolished by the London County Council in 1962. No. 1 Vallance Road looks like post-war refronting of a 1870s shophouse that may not have conformed with Munro’s speculation. At the Old Montague Street corner the King’s Head was rebuilt independently, perhaps not until 1887. It was converted to shops and flats in 1937–8, and cleared in the 1970s.4

Nos 1–11 survived in the ownership of public authorities, Transport for London and Tower Hamlets Council, but fell into dereliction and were scaffolded by 2008. Tower Hamlets proposed demolition, believing the row to be a dangerous structure. This was successfully resisted on conservation grounds in 2014 since when plans for redevelopment behind retained facades with a fifteen- storey tower have been prepared by Fletcher Priest Architects.5 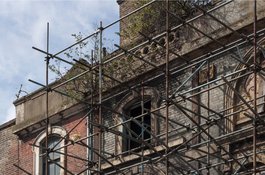 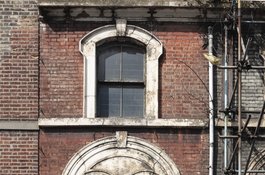