57 Mansell Street
Back to MapContribute

It is often assumed that 57 Mansell Street was built as a pair with No. 59. Pointing out that ‘the real wealth of Georgian England derived from trade’, Giles Worsley regarded the two houses as ‘lone witnesses to the City’s wealth, and for this reason they are among the most important surviving early 18th- century domestic buildings in London’. 1 Though it does not consider the kind of trade that is being witnessed, this is a fair assessment of significance, but it should apply in singular form to No. 57 alone, which is more than a century-and-a-half older than No. 59, which, most surprisingly, is a copy of the 1880s.

No. 57 stands alone as an extraordinary survival from the early eighteenth- century development of Goodman’s Fields. While it and its copycat pair do provide welcome relief in terms of the character of the street scene, the early building is unusually fussy in its unscholarly classicism, a baroque style that evokes continuities with the late seventeenth-century City.

A mansion standing on this site by 1694, occupied by Katharine Clarke, a widow, had a rental value equivalent to that of the street’s other big houses. At some point in the 1710s Clarke sold this house to James Edmundson (1674–1729), a vicar’s son from Market Deeping in Lincolnshire, who was a director of both the South Sea Company and the Royal African Company, the principal business of which was the slave trade. Even so, he was one of the poorest of the South Sea Company’s directors and had bought the sinecure position of Purser on HMS Royal Anne, a naval frigate launched at Woolwich in 1709, for an income of £100 a year. He lived at 29 Prescot Street, a smaller two-room plan house, from around 1708 to at least 1722, with his wife Rachael (d. 1739) and four daughters. By 1720 Edmundson had pulled the Mansell Street house down and begun rebuilding to form an even grander mansion for his family to inhabit. He had to stop work with only the outside walls constructed when South Sea stock collapsed in August 1720, having spent around £1,000 and owing another approximately £2,000. ‘Almost ruined’, the Edmundsons nonetheless evidently did make the house habitable, probably later in the 1720s. In 1733 the widowed Rachael Edmundson was living in what was now the largest house on the street by rateable value.2

Isaac Dias Fernandes (_c._1687–1759) took this house in 1739. He had been a neighbour since at least 1733, in a house on the site of No. 61, having previously held premises at Angel Court, Throgmorton Street. Another increase in the rateable value of the Mansell Street house in 1741 suggests the finishing off of works that the Edmundsons had never completed, or, less plausibly, the addition of a garden building. Dias Fernandes, who was an immigrant, was granted denizen status in 1742. Whatever hand he had in its fashioning, his house proclaimed him as an established and wealthy London merchant.3

Dias Fernandes was a Sephardic Jew, born in Spain, who lived in Lisbon until 1706 when he fled the Inquisition with his father, Abraham (1657–1743), and brothers, Daniel and Moses. His mother had suffered an auto-da-fé, burnt alive on account of Jewish observance. Sentenced to death,the rest of the family fled to London with nothing, their goods confiscated. Abraham Dias Fernandes established himself as a merchant, using the pseudonym Miguel Vianna, trading between England, Portugal and Brazil from a base on Fenchurch Street, exporting wool and importing diamonds. His sons became prosperous merchants with interests in Barbados, Jamaica and North America. Isaac Dias Fernandes lived at No. 57 until 1755.4

The mansion of 1719–20 at 57 Mansell Street, perhaps not properly completed until 1741, was opulent even by the standards of Goodman’s Fields. But it was also conservative in architectural terms, a late flourish of the baroque for which design responsibility remains obscure. Constructed of brown brick with red-brick trim, the house has a five-bay front, three storeys, a basement and an attic. The central slightly projecting entrance bay is much embellished with Portland stone dressings. A rusticated arch to double doors, once topped by a fanlight, has engaged and fluted Doric columns supporting an open segmental pediment, so open as to embrace awkwardly the panelled apron of the architrave to the first-floor window. There is a similar architrave on the second floor and another stone panel above in the parapet. Moulded stone stringcourses of increasing weight rise to a cornice and the façade is framed by channelled stone quoins. The windows have prominent keystones. Those on the ground floor are reinstatements of the 1980s (see below).

The earliest documentation relating to the interior of the house comes from 1814 when the ground floor was said to comprise a handsome entrance hall, two parlours, a counting-house, and a kitchen. Among the first-floor rooms, a small dressing room nestled between a showroom and a silvering room. Five bedrooms and a further dressing room were on the second floor. The attic, basement and a two-storey coach-house and stable at the back of the garden on its south side supplied service accommodation. The house was large enough to have two staircases, the grandest being against the front wall and rising only to the first floor, an arrangement common in early-to-mid eighteenth-century houses of this stature in the West End.5

By 1756 Captain John Barker (1707–1787) had taken up residence in the house, moving from Wellclose Square. Barker was the son of John Barker (d. 1733), a Lowestoft merchant. He pursued a mercantile shipping career, but was a captive in North Africa in 1730 when his father wrote his will; provision was made for him to receive an inheritance once released. He returned and became one of the Younger Brethren of the Corporation of Trinity House in 1741, one of the Elder Brethren in 1750, and warden in 1762. From 1771 Barker was the governor of the London Assurance Company, marine insurers. He maintained a close interest in the Russia Company and from 1749 was involved with the development of Ramsgate harbour. As his wealth grew, he became increasingly involved from the 1750s in charitable activities, as a governor of the Royal London Hospital, a director of the Royal Hospital for Seamen at Greenwich, and from 1758 to 1773, through close involvement with the Magdalen Hospital for Penitent Prostitutes. Barker commissioned a portrait by Joshua Reynolds in 1786. In keeping with the house he had occupied for thirty years, it was stylistically conservative. He died in his Mansell Street home in 1787.6

After a short period lying empty, No. 57 was occupied in the 1790s by Henry Tickell (1753–1803), the proprietor of the King’s Arms brewery on Old Castle Street (see p.xx). Isaac Goodman, the son of Henry Goodman who held the mansion at 18–20 Alie Street (see p.xx), followed until around 1821. He was a merchant, a warden of the Hambro Synagogue and the sometime business partner of his brother, Philip Goodman, at the Alie Street house. From 1804, Isaac Goodman lived controversially with Charlotte Geering (d. 1832), a Christian of modest background. The couple moved to Brussels in 1819, while keeping a foothold in London. On Isaac’s death in 1856, their ‘marriage’ proved not to have been solemnised, nor had it ever been recognised by Goodman’s family, which led to a court case that disputed the legality of his will and the status of their children.7

The house was divided into two tenancies in the 1820s, before being acquired in the early 1830s by Samuel and Henry Harris, brothers and harness-polish manufacturers. After Henry died in 1844, Samuel made No. 57 his home as well as business premises for a time, but the property appears to have been fully converted to factory use around 1850. The Harrises had family ties to the Bahamas, which led Augustus John Adderley, a Bahamian merchant, to use 57 Mansell Street as an address for London correspondence in the 1870s. Plants from the Bahamas for the Royal Botanic Gardens at Kew were also sent via Samuel Harris & Sons on Mansell Street. Around 1880 a three-storey warehouse (31 West Tenter Street) replaced the stable and coach-house behind No. 57. This survives, with twin inner loopholes in a four-bay stock-brick front. A glass roof linked the warehouse to the former house.8

Another large double-fronted late seventeenth-century mansion had once adjoined No. 57 to the south. It had been occupied by Thomas Jordain in 1693–4 and then successively by John Hollis (d. 1736), a citizen Draper, Sir Clifford William Phillips (d. 1754), a Justice of the Peace for Tower Hamlets, Captain James Sanders (d. 1778), a Turkey merchant, Francis Benson (see above), and David Samuel (d. 1798), a prosperous Jewish merchant who moved here from Leman Street, his widow staying on alongside David Samuda & Son. A pair of smaller houses replaced it in the 1820s or ’30s. By 1851, Samuel Harris occupied the house nearest No. 57 and by 1887 the Harrises had acquired the further house. The firm then redeveloped, erecting a five-bay warehouse as 59 Mansell Street. Wigg, Oliver & Hudson were the architects, the elderly Harry Oliver and John Hudson probably delegating much to John Charles Hudson. Consett Bros put in the lowest tender. The Harrises had respectability and wealth and perhaps, to judge from the later warehouse to the north, a penchant for classical architecture. Oliver had long been the District Surveyor for Whitechapel, and may have had some concern for streetscape, but all that is hardly sufficient explanation for the fact that this harness-polish warehouse was so carefully made, even unto stone dressings, to look like an early eighteenth-century mansion, almost matching No. 57 in its external appearance, different only in being executed with yellow-stock bricks and inferior stone, and without a columnar porch and double-door entrance.9

Harris and Sons continued at both properties into the 1900s, but by 1921, No. 57 was subdivided and in use by cork merchants, while No. 59 was the base for the Jewish Association for the Protection of Girls and Women, which had leased the premises from 1914. This organization had been formed in 1885 as the Jewish Ladies’ Society for Preventative and Rescue Work in response to reports of a slave trade in Jewish girls from Eastern Europe who were being pressed into prostitution in places as far flung as South America, South Africa and Turkey. In 1896, championed by an elite Anglo-Jewish group led by Constance Flower, Lady Battersea, the Society changed its name. Four years later, Joseph Pyke gave the Association the freehold of Sara Pyke House on Prescot Street, which he had built in memory of his wife for use as a lodging house.10  But 59 Mansell Street was the first building to allow all of the Association’s functions to be unified under one roof, accommodating ground-floor offices, first-floor clubrooms and workrooms, and living quarters above for unemployed vulnerable girls who had arrived in London without means or connections. The First World War significantly accelerated the Association’s activities. Annually, hundreds of unaccompanied girls were met at the port’s arrival points and offered support and refuge. The Association relocated and in the 1920s No. 59 became a Club for the Jewish Deaf.11

From the 1930s to the 1980s, Nos 57 and 59 were both used by various short- lived rag-trade businesses. They were Listed in 1971 around when the ground and basement floors of No. 57 were converted to be a ‘tandoori’ restaurant. In 1986–8 both buildings were extensively refurbished for office use in connection with the Aliffe House development. Trehearne and Norman, Preston and Partners oversaw the project, which received plaudits for creative reuse. Anthony Millar, the job architect, picturesquely deemed No. 57 ‘in the real pot belly and roast beef Georgian tradition’.12 Shopfronts having been inserted in the early twentieth century, the ground-floor windows of No. 57 were reinstated. The north wall was rebuilt beside a newly formed foot passage. The pavement-side stone piers with bold ball finials and linking railings, possibly all late nineteenth century, were restored, as were rainwater hoppers, bearing the dates 1720 and 1888. The warehouse at 31 West Tenter Street was also refurbished and reconnected to No. 57 via a curved glazed atrium roof. No. 59 gained a mansard attic, and a link back to a new four-bay neo-Georgian block at 29 West Tenter Street. As offices for the Royal Society for Public Health since around 2009, No. 59 has been named John Snow House.13 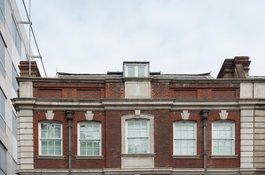 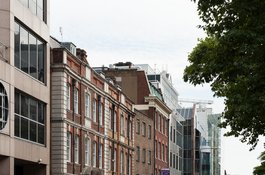 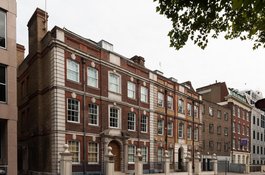