24 Alie Street
Back to MapContribute

Presenting as a matching pair, Nos 24 and 26 do appear to have origins as an early eighteenth-century mirrored twosome, of three storeys and basements with gambrel attics. There is also a matching pair of houses of 1880 at the back of the plots facing North Tenter Street. However, the evolution of this site is not as straightforward as might be imagined. Despite many alterations, No. 24 retained most of its early eighteenth-century front wall, with blind window bays and plat bands, until 1987 when it was rebuilt with a façade that was a facsimile of that at No. 26, which had itself been refronted in 1886.

The house at No. 24 was occupied by John Player by 1733 and in the early nineteenth century by Bendix Barnard Levin, a merchant, and described as ‘conveniently fitted up for a small genteel family’, with four bedrooms and a detached counting house.1 The neighbour at No. 26 was occupied by Jane Moore in 1733. Merchants that followed included Archibald Fleming & Co., George Frederick Baker (Bahr), and Moses Assur. For forty years from 1844, this house was occupied by a ladies’ school, identified as a seminary in its later years.2

From 1880 Charles Wollrauch, a Polish-born Jewish developer, had No. 24. The three-storey pair of houses at 8–10 North Tenter Street was built in that year, no doubt on Wollrauch’s initiative, employing Crisp and Tomlin of Commercial Road as builders. The seminary departed No. 26 and it was again doubtless Wolllrauch who saw to the refronting there in 1886, deploying contrasting yellow and red stock bricks and a fine pedimented door-surround. His son, Samuel Wollrauch, applied for a music and dancing license for No. 24 in 1908, by when that house had been subdivided to accommodate three Ashkenazi Jewish families. By the 1930s it was in use as tailoring workshops. Alterations in 1938 included the insertion of a shopfront. After a period of vacancy No. 24 was rebuilt in 1987, with its new façade copying that at No. 26, and put to use as offices.3

For sixty years from soon after 1900, No. 26 was the offices of Alfred Turner & Sons, solicitors to Stepney Borough Council, which had a base at No. 22 until 1923. Also vacant for a time, No. 26 was converted into flats for Alie Street Homes LLP in 2015–16, to designs by Dovetail Architects Ltd. There was associated refurbishment at 8–10 North Tenter Street.4

Three early eighteenth-century houses were cleared around 1815 for the making of Alie Place. Early residents of these included Daniel Quare, a merchant, in the 1730s, Alexander Champion, George Hayley’s partner around 1760, and Samuel Barron from the 1740s to ’80s.5 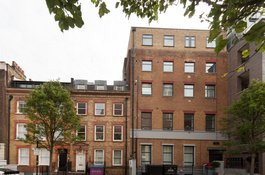 South side of Alie Street with nos 24-26 to the left, August 2017
Contributed by Derek Kendall