122 Whitechapel High Street
Back to Map

122 Whitechapel High Street
Contributed by Survey of London on July 4, 2018

This sliver of a building between Old Castle Street and Tyne Street is all that remains of a two-stage development of 1880-2 that included 118-120, the other side of Tyne Street, 118 demolished in 1959 and 119 and 120 c 2004. In 1880 the sites of 118-120 and 122 (there was no 121 by this time) were cleared at a cost of £400 by the Whitechapel Board of Works (the Metropolitan Board contributing £200), which described the entrance to Newcastle Street, through a low archway in No. 120, as ‘narrow and crooked with no footway’. The blank and scarred Old Castle Street flank wall of No. 122 shows the ghostly imprint in roofline and chimney breasts of No. 123, a rebuilding, with No. 124, in 1765-6 of dilapidated timber-framed houses on the east of Castle Alley/Moses and Aaron Alley, following a dispute over the party wall between the two houses ‘intermingled over and under each other’.1These 1760s houses, largely rebuilt in 1860 following a serious fire, briefly adjoined No. 122 until they were demolished in 1883 in connection with railway engineering works, the site fenced off, with an open railway ventilator in part, until built over with roadway in 1899 and added to the public way to improve the entrance to Old Castle Street, which had been widened in 1878.2

The builder, and probable developer of Nos 118-20 and 122 in the 1880s, was Benjamin Cook of Stonecutter Street, Farringdon.3 The buildings are (or were) in a token Queen Anne manner, red brick with dentil cornices to the second floor, and some terracotta florets above the first-floor and brick aprons beneath the second-floor windows. The corners of 122 and 120 were canted around the entrance to Newcastle Street.4 Rag-trade tenants occupied most of No. 122 from when it was built until the Second World War, after which it was a café, the upper floors offices and workshops.5By 1972 Reed Employment Agency had an office at No. 120, and in 1989 its founder, Alec Reed, established in No. 122 the charity Womankind to support women’s rights and channel development aid to women.  Financed for three years by Reed the charity then moved to larger ofices. The National Alliance of Women’s Organisations also had its offices here when it was founded in 1989.6  The shop at No. 122, having been a stationers and bank, is currently an estate agent. The building was sold in 2005 by Warner Estates to its then tenant, Vishnu Patel, for £750,000, though permission given in 2008 to demolish the building and redevelop it with a six-storey block of flats with ground-floor shop to the designs of Clements & Porter architects was not implemented.7 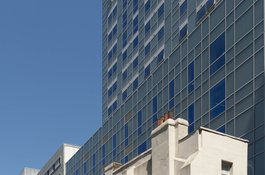