1-3 Whitechurch Passage
Back to MapContribute

65A Whitechapel High Street
Contributed by Survey of London

No. 65a Whitechapel High Street has its origins as a building of c1897. Prominent from the west, it was well finished with lavish use of Portland stone dressings on red brick. It appears to have been built for a Mr Jenkins with Aaron Cooperman; Abraham Goldenfeld, a warehouseman, was the first occupant.1 The building was substantially refurbished in 2010-12 by Julian Harrap Architects (Robert Sandford, job architect), with PAYE as contractors. Applied stucco was removed and the red brick restored. Lion masks in the frieze and the parapet with its pediment and ball finials were reinstated. This work was the first part of the High Street 2012 project, ninety per cent funded from Tower Hamlets Council with English Heritage through a Heritage Lottery Fund Townscape Heritage grant. The project had been conceived when it was anticipated that the 2012 Olympics Marathon would pass by. 2 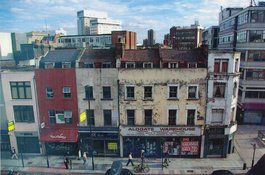 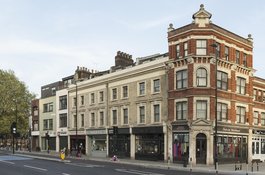