St George's German and English School
Back to MapContribute

St George’s Church had supported ‘German and English Schools’ from 1765, but there was no school building until 1805. Pastor Dr Christian E. A. Schwabe, who had arrived at St George’s in 1799, was an experienced teacher and instrumental in this initiative. Stable and coach-house buildings east of the pastor’s house on Alie Street were replaced by a modest single-bay three- storey clerk’s house and a three-bay single-storey school. The clerk’s house had a second door for a way through to the burial ground and vestry block to the rear. Samuel Page (1771–1852), the parish surveyor who drew a plan of this site in 1802 when deliberations about its future were underway, may have been responsible for designing the buildings. The small school accommodated a mixed class of girls and boys aged seven to fourteen. Schwabe moved to Stamford Hill where he established a school for well-to-do German families, many of which, with other wealthy German merchants, some of them sugar-bakers, supported the Whitechapel school and enabled less well-off children to attend on scholarships. Numbers increased rapidly, and after a decade the girls' classes moved to the now former pastor’s house. Schwabe also became chaplain to the Duchess of Kent, Queen Victoria’s mother, who became the patron of the school and is said to have worshipped regularly at St George’s. Schwabe, who died in 1843, has a commemorative tablet on the west wall of the church, in German.1 In the 1850s, during the pastorate of the Rev. Dr Louis Cappel, rooms in the former pastor’s house were given over to an infants’ school, such provision being seen to be an urgent necessity for the local German population to allow mothers to go out to work. Then, in 1859, a separate infants’ school was built on the former burial ground, to the east of the church vestry behind the earlier school. This attractively polychromatic two-storey building was a gift from W. H. Göschen, a banker, the son of Goethe’s publisher, and the father of G. J. Goschen, who became the first Viscount Goschen through eminence as a Liberal MP for the City of London. By 1877 there were 283 infants registered, but the infants’ school had come to house older girls, the infants being in the vestry, the boys in the front range. The intake of the schools had increased to the extent that accommodation was inadequate.

The whole frontage east of the church was redeveloped in 1877–8, still under Cappel. Large new junior schools went up, with E. A. Gruning, himself an immigrant German, being the architect of the striking red-brick block that survives. Browne and Robinson of Worship Street were the builders and Baron Oscar von Ernsthausen, another immigrant German, was the Treasurer. The most significant benefactor was James Duncan, a local sugar-baker who employed many German workers.2

The new junior schools had three main storeys, attics and a basement that was lit from above the pavement and used as a playground. Four large classrooms on the raised-ground and first floorscould each accommodate up to seventy boys or girls. Sliding partitions allowed for classes to be taught alternatively by German and English teachers. The upper levels housed a schoolmaster’s flat, teachers’ bedrooms, and house-keeper’s rooms.

St George’s schools closed in 1917 when Pastor Mätzold was deported to Germany. The lower floors soon fell to use for tailoring, and the upper storeys were otherwise let out. In 1983 St George’s converted the first floor to be a student hostel and retained the basement as a church hall. Both the junior and infants’ schools were converted into flats in the late 1990s.3

Of German ancestry, John Helmcken's father and mother ran the White Swan Pub on Alie Street in the early-mid nineteenth century. Helmcken grew up there, attended St George's German and English School from the age of four, and latterly recorded his memories, which were edited and published by Dorothy Blackey-Smith in 1975 under the title 'The reminiscences of Doctor John Sebastian Helmcken'. Below is an extract relating to the church and school:

"In Little Alie Street stood St George's German Church and School - the former old fashioned, with galleries on each side and above in the corners; a complete church with the Revd. Dr. Schwabe as Minister. The school was an ordinary schoolroom, with a stove in the centre and plenty light. A graveyard existed immediately at the back of the school and hardly separated from it, save by a diminutive fence. Sunflowers and others grew in it and somehow or other the boys considered it sacred and seldom played there at all. The bricks of the school were furrowed, by the boys sharpening their slate pencils there. The church was heated by a furnace fed from the outside; hot air passing into the church...

I suppose I was like other little boys full of mischief, and so sent to a girls' school kept by an old Miss Somebody...However I was soon turned out of or taken away from the girls' school and sent to St George's German and English School, Vorweg the Master being a friend of my mother. So having dressed - made decent and my hair brushed, I set to crying, but this did not hinder my going. Father took me there and left me to cry in the schoolroom all day. After a short time I got used to the discipline and used to go off with alacrity at 9 o'clock in the morning and remain at school until 5 in the afternoon. As schools go now, this would be considered a very poor school indeed, as we were only drilled in English and German, Writing and Arithmetic and Geography. The school was partly supported by subscriptions, chiefly from the Germans - the cost to a scholar being I think about ten shillings per quarter plus books and so forth. There were about eighty boys of all sizes and grades...

It was the prescribed duty of certain boys to wind up the church clock once a week - it had a winch. No boy ever went alone! As several went usually together, nice romps we had occasionally in the church, but for all this we felt uncanny in the place, particularly as in the vaults under the entrance to the church, lay buried, some of the enlightened pillars of the church and perhaps ministers etc. I never saw these vaults opened but once - someone had to be buried. A huge flagstone covering the vault had been removed, and descending into the dismal cavern, one saw tiers of leaden coffins, some encased with wood, others where it had rotted off. I did not stop there long - a lantern shed a dismal light - and the air felt cold and I shuddery.

We all were expected to be in church twice every Sunday - and had benches fronting the altar and the Clerk, who was Vorweg our schoolmaster. Of course we could all sing and so were a sort of choir. During Lent the church was draped in black - pulpit, reading desk and all - and then we had to go to church twice in the week also. At Christmas it was bedecked with rosemary, holly and laurustinus. The services were all in German - the congregation Germans - chiefly from Hanover, at all events Low Germany and comprised among others many German merchants from the City and surroundings." 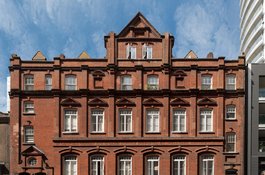 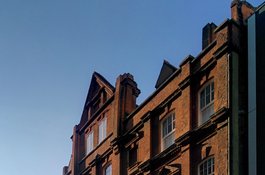 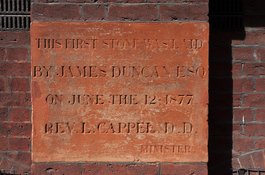 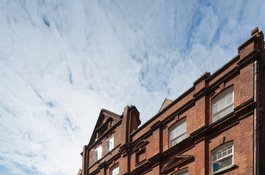 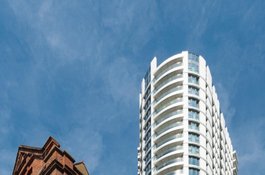 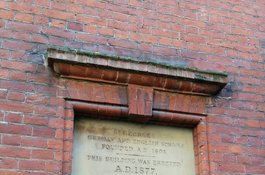