1894-5, Clergy House for St Mary Matfelon Whitechapel, converted to post office and then to restaurant

This site near the north-west corner of what was the parish churchyard was part occupied by the parish watch house and a fire-engine house from the early years of the nineteenth century. The fire-engine house fell redundant in 1875 and in 1881 the Rev. Arthur James Robinson sought a long lease of the site to build a curate’s house. The Vestry approved his plans but the project did not advance until 1892 when Robinson put forward a different scheme for a new building on the site of an old cottage and the former engine house. 1

The Clergy House was built in 1894–5, seen through by the Rev. Ernest A. B. Sanders with Herbert O. Ellis as architect and Thomas Little as builder. Of red brick with stone dressings, like the parish church that had been rebuilt in the 1870s, its corner turret gave it a strong presence. This was diminished by the loss of a conical roof, perhaps due to war damage, which may also account for the rebuilding of the north flank elevation. The building accommodated not just curates, but also the Working Men’s Club and the Lads’ Brigade on its lower storeys. It was converted to be a Post Office in the mid 1930s and there was upper-storey office use from the 1940s. The building now houses a Japanese restaurant. 2

The former clergy house, seen when in use as a post office c. 1977, from a digitised colour slide in the Tower Hamlets Archives collection: 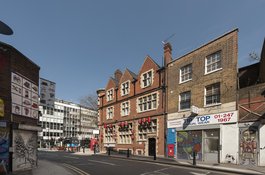 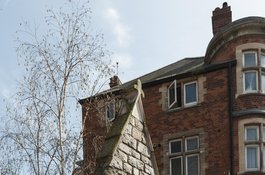 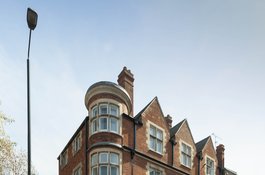 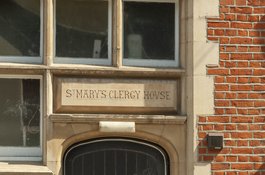