Lattice House
Back to MapContribute

Lattice House, 20 Alie Street (including 14–18 North Tenter Street)
Contributed by Survey of London on May 6, 2020

Built in 2010–12, Lattice House unites the sites of two substantial early eighteenth-century Alie Street mansions and to the rear wraps around a nineteenth-century warehouse at 18 North Tenter Street.

The westerly first house here, as wide as its neighbours on either side, was occupied by George Mussell by 1733 in which year he died, very wealthy and possessed of property in the City. Like Cooksey, his next-door neighbour, Mussell had been a Blackwell Hall cloth factor. His widow, Elizabeth, and son, Ebenezer Mussell (1703–1764), who became a noted collector of antiquities, had departed to Bethnal Green by 1737 when Abraham Lemburg was briefly resident in the Alie Street house, gone by 1740 and followed by John Hayward. The Rev. Joseph Denham had the house from around 1745 up to his death in 1756 (see above). It may have been used as a meetinghouse thereafter, perhaps reflecting schisms at the chapel across the road, with Thomas Jordan, a local brewer, using cellarage.1

James Potts, a merchant, was resident around 1780, followed by Raphael Franco, then in the 1790s by Gabriel and Joseph Israel Brandon, brokers, succeeded around 1830 by Judah Aloof, another merchant, whose family were here into the 1860s. The house suffered fire damage in 1877 and the garden was built over in 1888, its place taken by a substantial warehouse that remains extant as 18 North Tenter Street. Built for Samuel Moses, a dealer in second-hand military clothing, William Dunk and John Mease Geden were the architects, and H. L. Holloway of Deptford was the builder. Of five storeys with a polychrome brick five-bay elevation centred on a loophole bay with a wall crane, it is a fine specimen of its kind. A five-storey steel-framed workshop replaced the house in 1930–1 to be multiply occupied by small-scale clothing manufacturers.2

The last and most easterly of the three early eighteenth-century mansions at what became 18–20 Alie Street had a comparable 40ft six-bay frontage. It was advertised in 1730 as having four rooms on a floor, with vaults, a counting house, a warehouse, a garden and stables. It was also said to be fit for a merchant, its inhabitant, John Askew having died. Askew was a Quaker merchant who had spent time in Pennsylvania as an associate of William Penn’s. He was back in London from around 1706; it is not known when he moved to Alie Street.3 Samuel Storke (_c._1687–1746) lived here from the early 1730s. Storke was the son of a Hampshire clothier with New England connections who lived in Boston in 1712–14 before returning to London to found what became one of London’s largest Atlantic merchant houses, trading to Boston, New York and Philadelphia.4

Robert Wilson, a corn factor, followed from the 1750s to the 1780s. His successor, Henry Goodman, another merchant, was followed by his sons, Isaac and Philip Goodman, wholesale toymen (dealing in luxury trinkets), who built over much of the garden in the first years of the nineteenth century. At this point the house was described as having three storeys and six bedrooms. The ground floor had a spacious hall, two parlours, and a counting house. To the rear there was a yard, a warehouse, two coach houses and a stable. Though he had emigrated to Brussels in 1819, Philip Goodman carried on business as a toyman here until around 1836. In the 1840s and ’50s the premises were occupied by Moses & Ephraim Levin, ‘importers of beads, toys, & foreign manufactures; also birmingham & sheffield goods of every description’. Cigar importers and makers followed by the 1860s. A plain six- bay brick front with plat bands survived, behind projecting ground-floor shops, possibly constructed in 1874–6. The building was raised to five storeys in 1897.5

The back part of the site onto North Tenter Street was divided in 1850–3 when separate east and west three-storey warehouses were built. That division came to be reflected at the front by the 1880s when the large house was occupied by both John Pound & Co., a case and trunk maker, and William Richard King, a builder and carpenter. A range of businesses from estate agents to matzo importers followed, with a strong rag-trade presence from the mid-twentieth century, the back buildings having been reconstructed in 1939.6

A series of redevelopment proposals was advanced in the 1980s, including a scheme by Trehearne & Norman for A. Goldstein. By 1990 the westerly house at Nos 14–16 had been cleared and the demolition of Nos 18–20 approved, but redevelopment was deferred. New schemes were advanced in 2002–4 by City North Group PLC, but it was not until 2010–12 that a building was finally erected spanning both sites. Designed by Architecture 00 Ltd for Prideway Developments Ltd, an Irish firm, the six-storey brick-faced block mixes residential and office accommodation with an open courtyard behind the warehouse at 18 North Tenter Street, which had been converted to flats in the late 1990s. An additional storey was added in 2016 to plans by Studio Kyson to create three more apartments.7 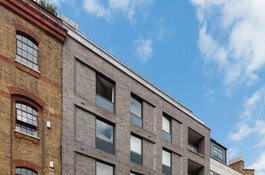