Symons House, 22 Alie Street, including 12 North Tenter Street
Contributed by Survey of London on May 6, 2020

This plain four-bay building appears to have been constructed around 1800 as a four-storey warehouse-showroom with a back building to the Tenter Ground for Baron Lyon De Symons (1743–1814), a diamond merchant, born in Pressburg (now Bratislava), and a leader of the Ashkenazicongregation at the Great Synagogue in the City. Symons was certainly in occupation from 1791, holding the property under Samuel Hawkins, though in 1812 he was operating out of Billiter Square having been declared bankrupt. A preceding house was up by 1733 and occupied by John Richardson, and then from 1737 by Richard Richardson, a merchant and Clothworker, up to his death in 1765.1

From around 1840 to their winding up in 1847, the Tower Hamlets Commissioners of Sewers used the building as a headquarters or ‘court-house’, the Office for Sewers, evidently constructing asmall but fine hall with a boardroom to the rear. It was tenanted on their behalf by John William Unwin, an attorney and the Commissioners’ secretary. The lease from Edward Hawkins passed to the Metropolitan Board of Works, which in turn transferred it to the newly formed Whitechapel District Board of Works in 1856, for equivalent administrative use as that organization’s headquarters, keeping the fittings and furniture. The premises continued in municipal use by Stepney Borough Council.2

In 1923 the Workers’ Circle Friendly Society acquired a lease and took up occupation. Founded by Baruch Weinberg, a Brick Lane printer and writer, the Circle was a Jewish socialist mutual-aid society. It helped striking labourers and campaigned for better pay and working conditions. Beyond the purely economic sphere, the Circle supported working-class Jews through social, cultural and political events and meetings, the far less progressive Jewish Working Men’s Club having closed down a decade earlier. Unlike the club, which had conducted its affairs in English, the _Arbeyter Ring _was entirely Yiddish speaking. A regular visitor, Joe Jacobs, recalled: ‘Every shade of Russian and European Labour thought and action was represented here.’3 Indeed, the London Workers’ Circle maintained links overseas, as with its senior counterpart in New York City.

The Circle commissioned L. G. Ekins, the Co-operative Wholesale Society’s architect, to draw up plans to adapt the building, which was renamed Circle House. The Alie Street front block accommodated offices and a large first- floor clubroom. A self-contained flat was in the basement. The Tenter Street hall, to the rear, was adapted to house a lecture and meeting room, a committee room and a classroom. The building was badly damaged in the Blitz. In the 1950s the patched-up Alie Street building was occupied by W. J. Furse & Co., electrical and lift engineers. An additional storey was added in 1978–9 and in 1998 the block was converted to form nine flats above a ground- floor office, to designs by Richard David, architect. Back parts had been ruined in the Blitz, and the warehouse at 12 North Tenter Street was built in 1956–8. In 2012–14 two more flats were formed in attic additions to both the Alie Street and North Tenter Street buildings.4 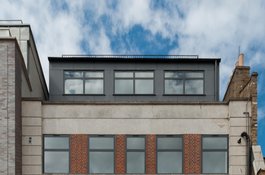 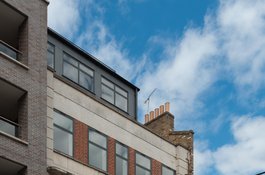 In context
Contributed by Derek Kendall