2 Ensign Street (with 14 Cable Street)
Back to Map

14 Cable Street and 2 Ensign Street
Contributed by Survey of London on March 5, 2019

Plain Georgian shophouses at 4–10 and 14 Ensign Street were cleared in phases between 1911 and 1954, No. 10 having been the Black Horse public house since at least the 1780s. Minor redevelopment plans for sites around the western Cable Street corner with Well (Ensign) Street were repeatedly intended but not carried out from the 1920s to the 1980s. No. 2 at the corner hung on, held by Dr Morris Korn into the 1970s, his surgery squeezed alongside a café run by a Mrs Aranzulo. The four-storey brick block that is 14 Cable Street and 2 Ensign Street, seven flats over a shop, was built around 1998, half-heartedly emulating its neighbour to the south without the coherence of its predecessor.1 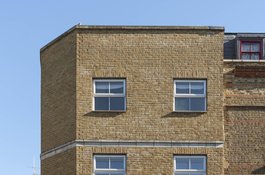