8 Cable Street
Back to Map

8 Cable Street
Contributed by Survey of London on March 5, 2019

8 Cable Street, probably built in the 1890s for Bridger, was then occupied by Nathan Van Flymen, a cigarmaker, followed by other tobacconists into the 1950s. It was raised in 2002–3 in a flat conversion for Danny Newland by Dransfield Owens de Silva, architects.1 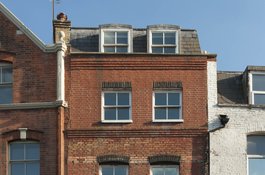