19 Dock Street
Back to Map

James Golding, a licensed or bonded carman on Christian Street, acquired a large (128ft) freehold frontage here in 1860 and as James Golding & Son immediately enclosed a yard that extended back to Well Street. The Dock Street entrance was flanked by the substantial three-storey stock-brick buildings that survive, a warehouse (now No. 15) to the north and a twelve-room double- fronted house (now No. 19) to the south, with stabling and lofts behind. The warehouse is strikingly peculiar with its tall triple relieving arches, Golding’s architect and builder are not known. Henry Golding sold up in 1872, Scott & Till, hemp and coir merchants, took up occupation, and several other firms followed. J. Carter & Co. Ltd, bank and office fitters and furnishers, had the warehouse from the 1920s. Abdul Sabain had dining rooms in the house in the 1940s. Carter & Co. then took the larger site up to 1986. The warehouse was subsequently acquired and used by Art for Offices. A conversion with the replacement of a lower setback link range with a five- storey block, for fourteen flats and two recording studio-office units, was carried out in 2008 for Chohan Bros Construction Ltd of Wembley Park (as or with Jasmine Estates Ltd), working initially with Tasou Associates Ltd for designs prepared in 2002, later with Loren Design Ltd (Richard Loren). The lion-topped piers to the yard entrance, in place by the 1930s, have been relocated, and the house has lost a bold cornice and had an attic added. 1 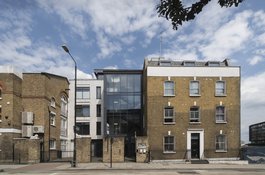 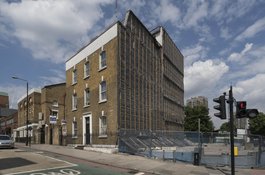 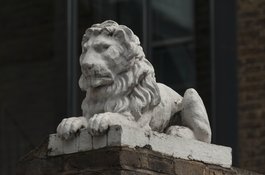 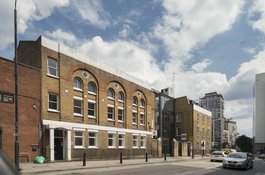 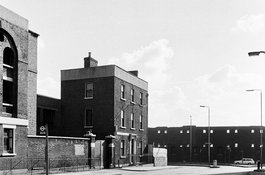