11 Dock Street
Back to MapContribute

This house was built in 1847 on a plot to the north of St Paul’s Dock Street for its chaplain. The 45ft frontage was sold by the Commissioners of Woods and Forests for £500, below its market price because of the charitable nature of the purchaser's intentions. Henry Roberts, architect, and William Cubitt & Co., builders, responsible for the church, saw the house up as well. Roberts’s plans for a house with three sitting rooms and six bedrooms came with an estimate of £950, but the Cubitt tender was £1,250 so Roberts simplified things to agree a contract sum of £1,050 after ‘a good deal of difficulty’. The costs were covered by the amount allowed for endowing the church in the church’s overall subscription fund.1 Of stock brick and three storeys with a stucco cornice and a basement, the house is double-fronted in three bays with spearhead area railings and slightly battered ground-floor architraves, a subtle Greek Revival touch characteristic of Roberts.

Minor works in the twentieth century included the additions of a garage to the south for Father Joseph Williamson in 1953–5. Parishes merged, and the house, listed in 1973, was subdivided in 1973–4. Cecil Brown, architect, oversaw works to make it three flats with parish meeting rooms in the basement.2

Just found this website which has some interesting detail about this building at No 11 Dock Street.

The builder was Sir William Cubitt 1785 - 1861 Railway and Canal Engineer and creator of the prison treadmill.  The Architect was an American, Henry Roberts 1803 - 1876 from Philadelphia. He eventually set up the Society for Improving the Condition of the Labouring Classes. Roberts was the designer of the current Fishmonger's Hall situated on the north bank of the Thames just to the West of London Bridge. 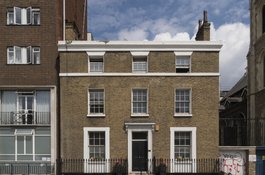 St Paul's Vicarage, 11 Dock Street, from the west in 2017
Contributed by Derek Kendall