1881 as the Blue Peter public house, previously and subsequently the City of Carlisle, now flats over a cocktail bar

61 Royal Mint Street (formerly the City of Carlisle public house).
Contributed by Survey of London on May 1, 2019

A public house on this site was called the Carlisle by 1750 and the City of Carlisle by 1783. Around 1850 it was renamed the Blue Peter, reflecting proximity to the port, and in 1881 the establishment was rebuilt in its present form, Patrick & Son of Westminster Bridge Road being the builders, with John Lacy taking a sub-lease from Truman Hanbury Buxton & Co. The pub reverted to being the City of Carlisle from about 1890 up to its closure around 1990, alternatively known as the Dublin in the 1930s under John Costain. After a spell accommodating a restaurant called Rosemary Lane up to 2013, the premises were adapted to be Simmons cocktail bar, with three flats above. The panel in the shaped gable bore the date 1881, recently altered to 1620 for reasons unknown. The earlier date has no known relevance to this site, though it was when William Abell acquired land across the road.1 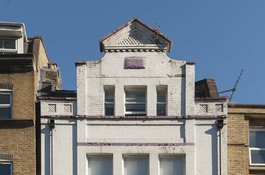 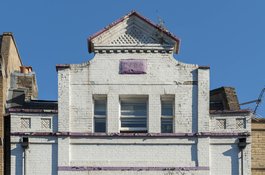