120 Leman Street
Back to MapContribute

Imperial Buildings or Warehouses were erected on this site in about 1884 replacing a sugar refinery on the wedge of land between the south side of Chamber Street and the arches of the London & Blackwall Railway Company.1 The twelve four-storey warehouses were originally arranged around a yard opening into Leman Street and were probably built for the railway company, since they were owned by the Great Eastern Railway (GER) Company in 1910.2 The ‘duty paid stores’ of the United Kingdom Tea Company Ltd., at Imperial Warehouse, Leman Street, from 1885, most probably represents this address, perhaps the two adjoining units on the far south-western side which were in use as a tea warehouse in 1887.3 By 1894 the warehouses to the south of the yard had been demolished, presumably during the widening of the railway line between Fenchurch Street and Stepney, leaving a run of six numbered 2–12 (evens) Chamber Street.4 In the same year the Co-operative Wholesale Society made alterations to one of the warehouses, and by 1897 all six were in use by the Society's drapery, tea and bedding departments.5 This was evidently a temporary arrangement, before these departments were transferred to refurbished warehouses at 116–118 Leman Street. In about 1911 Imperial Buildings was altered or rebuilt, with a canted corner at the junction of Leman Street and Chamber Street, by H. Jones of the GER Engineers’ Office, Liverpool Street. By the 1950s the timber-floored buildings, which were used as stores, factories and a printing works, presented a fire hazard and in 1974–9 they were classified several times as a dangerous structure by the district surveyor.6

Permission was granted in 1988 for the present seven-storey office building, described as being on an island site, and it was built in 1989–90.7 This curves around Chamber and Leman Streets, with the entrance at the apex, the smooth finish emphasised by large surface areas of steel and glass. The architect was IKA Project Design & Management, with Lovell Construction (London) Ltd as the contractor; the owner is recorded as both Warwick Balfour and Easepride Ltd, which in the late 1990s shared a director in Richard Gary Balfour-Lynn.8 In 2007 permission was granted for refurbishments to the entrance, in large part due to the renovation of CWS buildings locally – 120 Leman Street now stood ‘in stark contrast’ to Ekins’s ‘imposing’ 1 Prescot Street, by this time converted to apartments, and the conversion of 99 Leman Street on the opposite side of the road.9 In about 2015, Househam Henderson Architects (later Hyphen), which had already refurbished the cladding, created a canopy and a glazed facade at ground- and first-floor levels of the entrance and new reception areas.10 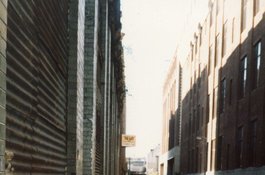