99 Mansell Street
Back to Map

There were five houses of around 1685 to the west of the site of No. 30, the two to the west knocked together by 1693 for John Topham at what had come to be known as Topham’s Corner. This end of Prescot Street had industry and warehousing from an early date. In 1731 ‘the corner of Prescot Street nearest the City [had] a house of three rooms on a floor, in good repair, with large warehouses, yard, stable, and other conveniences, fit for a Merchant or large Trader’.1 The large house at the end was divided in the late 1740s and, with a warehouse, stable and yard to the rear along Chamber Street, occupied from the 1750s to ’80s by Sarah Harris and her successors, including John Harris, a glass cutter, who in the 1790s also held leases of 8 and 9 Magdalen Row (Nos 23 and 24), as well as four houses on Chamber Street.2

Solomon Kick, a chiropodist, was at No. 31 by 1841, followed in 1844 by Abraham Coronel, a cigar maker and the manager of Emanuel Jonas’s Leman Street factory, and then around 1850 by Lammert Van Praagh, a Dutchman. Joseph Aaron Spyer, an importer of antiquities, passed through and gave way in 1870 to Samuel Abensur (d. 1883), a merchant from Essaouira in Morocco. No. 31 was rebuilt in 1907–8 as a four-storey shophouse in red-brick Domestic Revival guise by Chambers, Giet & Ford, architects, with Crisp, Fowler & Co. as builders. This survived to 2015.3

Building plots towards Mansell Street were compromised by Chamber Street slicing off to the south-east. This was exacerbated by the encroachment of the Haydon Square goods depot railway spur in 1851–3. By 1870 John Israel Lazarus, a packing-case maker, had a sawmill at Nos 32 and 33 which gave way to a four- storey warehouse held by George Rice, a furrier, in the 1880s. Nos 34 and 35 were in long-standing use by Henry Gadson & Sons as a deep-plan oil and colour warehouse that was rebuilt in 1895. The Commercial Co-operative Society occupied the small corner property beyond by 1870. The widening of Mansell Street in 1905–7 precipitated the loss of Nos 34–36. A five-storey red-brick warehouse was erected in 1912 by J. Greenwood Ltd, builders, on a narrow slip of land left over from the road improvement and given the address 99 Mansell Street. It was tenanted by Eggo Ltd, egg merchants, in the 1920s and came down in 2016.4

The Blitz accounted for the warehouse at Nos 32–33. In 1953, a utilitarian three-storey office block was built on the site to serve as offices for the National Dock Labour Board and a Lighterage Call Stand. Linked to the Shipping Federation’s development at 20–22 Presot Street, it came to be called Prescot House. Applications for redevelopment were approved in the 1970s and ’80s but not implemented.

Efforts to redevelop the site were renewed in 2014 by Marldon, an architecture and property company based in Clapham. The scheme as initially approved entailed the replacement of Nos 31–33 with six- and eight-storey blocks for offices and serviced apartments. Consent for a third block at 99 Mansell Street followed in 2016 and the railway viaduct at 55–56 Chamber Street was incorporated into the project in 2019. Marldon employed Simon Smith & Michael Brooke Architects and Waldo Works, interior designers. The Prescot Street elevation of what emerged as a fifty-seven unit aparthotel called Rockwell East, a reference to a Kensington forerunner, is divided into three blocks, corresponding to the buildings they supersede. While respecting the dimensions and brick colours of the demolished buildings, the blocks step up substantially towards the corner, from six storeys at No. 31 to nine at 99 Mansell Street. Double-height windows ground the base, which accommodates offices and a café.5 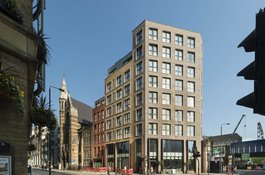 Rockwell East Aparthotel, 31–33 Prescot Street from the north-west in 2019
Contributed by Derek Kendall