66 Prescot Street
Back to MapContribute

66 Prescot Street and its predecessors
Contributed by Survey of London on Aug. 4, 2020

Among the early residents of the houses towards the east end of Prescot Street’s north side was (Sir) Clifford William Phillips (d. 1754), a distiller and a Justice of the Peace for Tower Hamlets. He moved from Leman Street to the house on the site of No. 64 where he lived from 1735 to 1739. Phillips came to prominence for quelling an anti-Irish riot at the south end of Leman Street on 30 July 1736 when, as he reported, ‘I heard the Hollowing at my House, and the Cry in the Street was, down with the Irish, down with the Irish’.1 He entered the fray, drew his sword, and, with the assistance of soldiers from the Tower, took control. Two years later Phillips defended Mary Bryan, a local woman convicted of selling gin, for which he was subsequently removed from office as a magistrate. Even so, he moved to a larger house in Mansell Street around 1740 and gained a knighthood in 1743.2

After the formation of St Mark’s Street in 1815, fifteen houses remained along the eastern stretch of Prescot Street’s north side (later Nos 62–76). There were further occasional unifications and rebuildings leading to some four-room plans. The Sailors’ Female Orphan Home was at No. 66, and several schools were here. There was a schoolhouse behind No. 64 in 1814, and academies were at: No. 58, run by John William and Louisa Coxford from the 1840s to 1880s; No. 67, run by Thomas and Elizabeth Chapman then Thomas Gibbons in the 1840s and ’50s; and No. 72, run by Andrew Wartog Wolff in the 1870s.3 John Edward Barnett, another eminent and wealthy gunmaker, was at No. 69 around 1817, and No. 70 was inhabited from the 1830s to around 1850 by the Rev. Dr John Gerhard Tiarks, the author of Practical German Grammar and Exercises – he offered German classes from his home. Thereafter No. 70 became the Widows’ Home Asylum, established in 1843 to provide food, clothing and accommodation for elderly Jewish widows, and continuing to around 1880.4

In the late nineteenth century Prescot Street claimed a small ‘synagogue’, likely behind No. 71. Said to have had its origins in a congregation that gathered on Rosemary Lane from 1748, to have been of pleasing appearance and evidently used for worship, it was not a formally consecrated synagogue. It was present before 1871, when it was altered and rededicated. In 1873, Morris Gomperts at No. 61 presented ‘a handsome Ark of mahogany … and a handsome silver gilt pointer inlaid with diamonds’.5

Close to the junction with Leman Street and lacking space to the rear, Nos 73–76 were smaller than most other Prescot Street houses. No. 76 was occupied in the 1840s by P. I. Samuels & Co., lapidaries and opticians to Prince Augustus Frederick, the Duke of Sussex, followed by Simchi Harris & Co., also lapidaries.6

The Co-operative Wholesale Society expanded westwards from its Leman Street base, acquiring Nos 73–76 in 1886 for its Tea Department, built in the 1890s (see p.xx). The rest of the Prescot Street frontage to St Mark Street (Nos 62–72) was taken by the CWS from the 1920s and redeveloped in the 1930s as tea office and coffee works blocks. Following closure of the CWS’s London Tea Department in 1967, the tea offices were sold to and refurbished by Minet Holdings Ltd in 1969–70 as 66 Prescot Street.7

The coffee works adjoining (Nos 63–65) stood empty. The CWS sought consent for office development on a planning-gain basis, but the GLC was opposed because this was not a Preferred Office Location. Resistance to increasing office accommodation in the locality was defeated after an inquiry in 1984. Minet Properties redeveloped the larger site, demolishing both CWS blocks around 1990 when Lister Drew Haines Barrow, architects, lodged plans for a replacement. The resultant seven-storey office block of the early 1990s, formerly known as Minet House, is clad in bands of light and dark pink with green glazing, corner turrets and other postmodern styling in a manner influenced by James Stirling. Its loud disregard for its setting is in marked contrast to Minets’ preceding and adjacent building of the 1970s at 100 Leman Street, which occupies the site of Nos 70–76.8 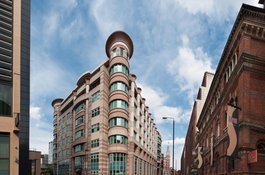 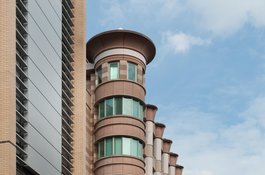