Princess Of Prussia, 15 Prescot Street
Back to MapContribute

Thomas Emerson (d. 1746), who had been involved in the running of Joseph Bagnall’s large sugar business after it was sold in 1722, had a sugarhouse at or more likely behind the house on this site by 1733. He had gone by 1745 and Thomas Quarrill rebuilt in 1746–7. Around 1770 William Complin, an apothecary soon to move to a larger house on Mansell Street, held both Nos 14 and 15, John Complin having been at No. 14 since the 1750s.1

After early nineteenth-century occupancies by a cigar-maker and a clothes dealer, No. 15 became a beer house around 1859 upon the opening of Whitechapel County Court next door. It and other local hostelries were said to ‘thrive entirely on the business of the court, and offer their drinking bars as a more amicable but less secure forum for the payments of the compromise of debts.’2 This pub was named the Princess of Prussia in homage to the marriage in 1858 of Princess Victoria to Frederick William, Crown Prince of Prussia, and was run in 1861 by Thomas Cox of Bethnal Green.3 A successor, Frank Sansome from Macclesfield, had an application for a public-house license rejected in 1865. Local victuallers reasoned that there were already ‘29 licensed houses, 20 beer shops, and several refreshment houses within 100 yards of Dock Street’. Sansome argued his trade was connected to the County Court next door, not the docks. Still unlicensed, he departed in 1870.4 By 1885, when the Princess of Prussia was transferred to Daniel Kuhl, a license had been granted and the premises were said to have a ‘splendid club room to let for societies’ and also ‘two or three rooms to let to respectable tenants’.5 In the 1890s, having come into the fold of Truman, Hanbury & Co., the pub was managed by a series of German-origin licensees, including Thomas Druhan, George Bawn, and Edward Kleinschmidt.6

The present building dates from 1913 when Mrs Catherine Cooper was the licensee. The rebuild for Truman’s was presumably designed by Arthur Edward Sewell, the firm’s in-house architect from 1910. Construction was by Snewin Bros & Co. of Upper Clapton. The emphasis on attractively legible faience lettering is typical of Sewell’s work. The bay window, moulded architraves and pedimented dormer are also characteristically domestic. The main ground-floor bar was originally divided, with the serving counter in the south-west corner diagonally opposite the entrance. To the rear was a single-storey public room. Above was a four-bedroom dwelling. Its interior long-since rearranged, the Princess of Prussia continues under Shepherd Neame, with a sunny semi-sunken beer garden beyond the back room.7 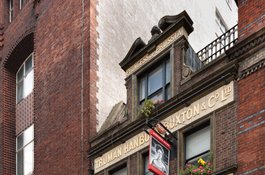 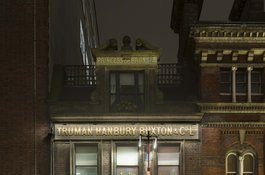 Princess of Prussia in early 2018
Contributed by Derek Kendall 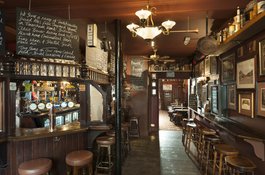 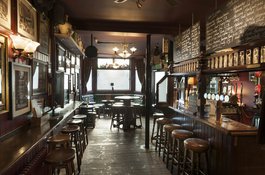 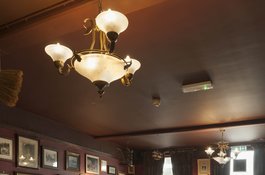 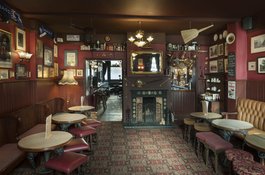 Princess of Prussia, interior, view from south to north in 2019
Contributed by Derek Kendall