The bioenterprises innovation centre was built in 2007–9 to designs by architects NBBJ to provide laboratory spaces for commercial enterprises emerging from research in biotechnology at Queen Mary, University of London. Positioned on the east side of New Road at its crossing with Walden Street (on a site formerly occupied by a 1970s hospital block), the centre marks the south-western limit of the university’s life-sciences campus in Whitechapel and is separated from the Abernethy Building by a narrow service yard accessed from New Road. NBBJ worked with Adams Kara Taylor, structural engineers, Norman Disney & Young, mechanical and electrical engineers. Walter Lilly won the main building contract. The concrete-framed three-storey block has perforated brass cladding over timber walls. This metallic envelope is interrupted by horizontal bands of glazing and a pattern of vertical depressions and ridges. The brass mesh was supplied by James & Taylor to EAG, the cladding contractor. The recessed ground and third floors are clad with smooth glass fibre reinforced-concrete panels. NBBJ’s design provided a lecture theatre capable of seating 120 students in the basement and university offices on the ground floor, entered via a glass-fronted entrance foyer in Walden Street. A separate entrance in New Road provides access to three upper floors assigned to open-plan laboratories.1

Three o'clock walk
Contributed by Mariame_Amouche on May 23, 2018

This is an extract from a longer piece of observational writing about a walk undertaken in 2018 by Mariame Amouche, a first year architecture student at the University of Westminster:

As I strolled further along lively New Road, I became attracted to the recently-constructed Queen Mary Innovation Centre. Its structure brought unwelcome changes to the neighbourhood's character and acts as an anomaly against the majority of the street’s architectural style. The intricately- patterned Centre is proudly poised against the sidewalk, contrasting against the short brick homes which are repeated along the street. It stands above the neighbouring buildings as if its intention was to intimidate them. I noticed that strangers of the street were compelled to turn their heads towards the big black building, their gaze neglected the surrounding domestic homes. I watched as the evening sun glared onto the tinted windows of the Centre as it lit up the rapidly gentrifying street almost angrily, pointing out signs of betrayal.

This is an observational sketch made in 2018 by Sebastian Dawber, also a first year architecture student at the University of Westminster.

This alarming sight forced me to continue on with my promenade down the street path. Several yards down the road from the Centre, I peered over at the never- ending linear geometry of constructed poles which denied passers-by a view of the deteriorating structure behind it. The scaffolding engulfed an older building and was ready to aid its transformation into a newer, more modern edifice. White cloth enveloped the scene almost as if it wanted to conceal the sin that was being committed behind it. 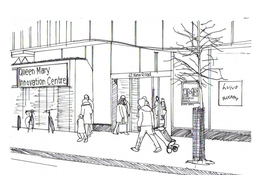 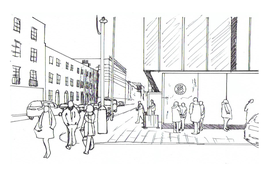 Corner of New Road and Walden Street
Contributed by Sebastian_Dawber