33 Mount Terrace
Back to Map

Mount Terrace
Contributed by Survey of London on Dec. 8, 2016

The terrace which extends east from New Road to the northern tip of Turner Street owes its name to Whitechapel Mount, an artificial hill formed as part of the fortifications built round London in the 1640s. A row of thirteen plain brick houses survives as the last mark of the City Corporation’s more extensive development of the site in 1806–7. Known as Mount Street until 1939, the road now called Mount Terrace was developed on both sides with two rows of seventeen houses. It was bounded at the north by Mount Place, a row of sixteen houses on the south side of Whitechapel Road, and to the west, seven houses in New Road that were originally (and confusingly) known as Mount Terrace.1

The development has a hectic planning history owing to the proximity of the London Hospital and the watchful guard over its vicinity kept by its House Committee. Secured by the hospital in 1750 by a City lease which expired in 1801, the site comprised the Mount bounded by houses west.2 Negotiations for a lease renewal were unsuccessful; it emerged that the City intended to develop the land. As the medical staff desired the hospital to be ‘as open and free to the air as possible’ to aid the recovery of patients, the prospect of nearby building development was received with trepidation.3 Initial opposition to the scheme subsided after (Sir) William Blizard and Thomas Blizard, hospital surgeons, persuaded the City to adopt a plan for two parallel rows of houses set ‘at a wide interval for gardens never to be built upon’.4 No drawings survive, yet a description in the committee’s minute books suggests that this compromise was to build no more than two terraces separated by central gardens; one row facing Whitechapel Road and the other overlooking a new street to the south.

The scheme fell quiet until 1805, when the Mount was cleared by Joseph Needham. In a curious turn-around, its reasons unclear, the agreement with the hospital was not honoured: the City Surveyor, George Dance the Younger, was asked to prepare a plan and elevation for advertising the site on building leases. His much denser plan proposed a row of houses in Whitechapel Road and a street to the south lined with terraced houses, enclosed at the west by houses facing New Road. Renewed opposition from the hospital was inevitable, yet an agreement was reached in 1806. The plan was altered with the formation of Turner Street, a public thoroughfare that cut between the houses and the west end of the hospital. This was accomplished by a new lease agreement with the City, in which land for the projected street was added to the hospital’s long-term lease of the adjoining site. Whilst the hospital failed to secure the paired terraces separated by gardens initially agreed, this revised plan represented a partial victory: it preserved ventilation and improved access to the hospital’s as yet undeveloped estate to the south.5

The houses were built by a consortium of tradesmen, of whom the main players were William Green, bricklayer of Brick Lane, and Edward Colebatch, a master carpenter based in the Minories who had recently been elected carpenter for the hospital.6 John Green (bricklayer), William Mason (builder), John Briscoe (glazier), William Smith (mason), John Wildman (plumber), Edward Davis (painter), and William and Thomas Godward (plasterers) were also involved. Joseph Barnes, most likely related to the local family of builder developers, might have been the sole builder of the terrace in New Road, which he insured in November 1806.7

Mount Terrace (formerly Mount Street) comprised three-storey fourth-rate houses, each with modest two-bay brick frontages of fifteen feet, standard rear-stair two-room plans and basements (Link to photograph). The terrace that faced New Road was similar, aside from its first-floor arcading (Link to photograph).8 Mount Place (144–174 Whitechapel Road from 1898) comprised third-rate terraced houses with wider frontages of eighteen feet and mansard attics.9 From an early date, Mount Place was peppered with shops: it is thought that Spiegelhalter & Co., clockmakers and jewellers, was founded in 1828 at No. 6 (164 Whitechapel Road), where it remained until its move to Mile End Road.10 After its forecourt was developed with single- storey shops around 1867, the row wore the appearance of a shopping parade, with many businesses connected to the local rag trade. In 1910 the terrace housed tailors, leather merchants, and a fireworks company, C. T. Brock & Co., famous for grand displays at Crystal Palace. Its frontage was renovated in 1934–9 with the addition of a prominent central clock and stuccoed shop fronts (Link to photograph).11 The row survived until the early 1990s, when it was demolished with the adjacent terrace facing New Road. Mount Terrace’s south side was demolished with Nos 80–84 New Road (even) in 1919 after the site was acquired by the London Hospital for redevelopment.12 The north side was shortened at its east end c.1960–70s to make way for the rebuilding of the hospital’s Alexandra Wing on an extensive scale. The surviving houses bear City insurance plaques on their façades. 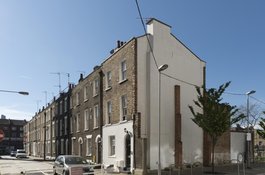 Mount Terrace from the east in 2017
Contributed by Derek Kendall 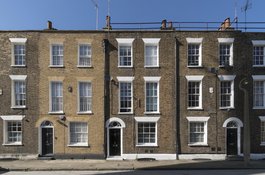 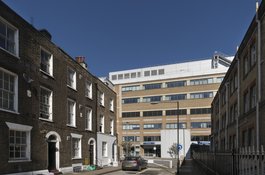 Mount Terrace from the west in 2017, looking towards the Alexandra Wing of the Royal London Hospital
Contributed by Derek Kendall